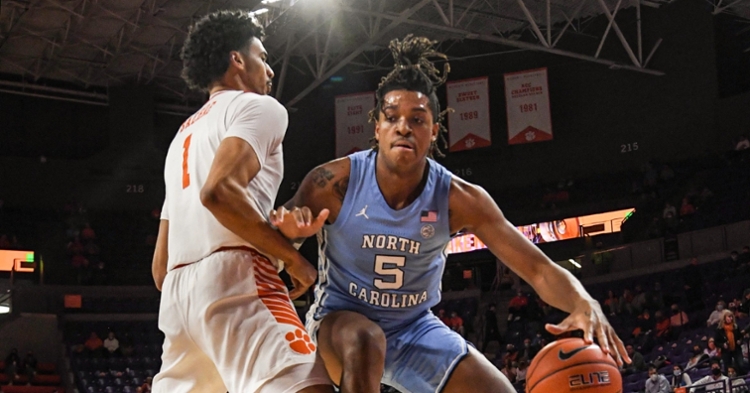 CLEMSON – The Clemson men’s basketball team needed a win in the worst way, and the Tigers found a way to grind out a 63-50 victory over North Carolina Tuesday night at Littlejohn Coliseum.

Clemson jumped out to a quick double-digit lead in the first half and held the Tar Heels at bay in the second half in improving to 11-5 overall and 5-5 in the ACC. North Carolina fell to 11-6 overall and 6-4 in league play.

Hunter Tyson led the way with 16 points, while Clyde Trapp added 14 points and nine rebounds with no turnovers. Aamir Simms was the other Tiger in double figures with 10 points. Clemson turned the ball over just seven times while the Tar Heels committed 17 turnovers. Clemson trailed just once at 2-0.

Clemson has now won two in a row and three out of the last four over North Carolina. In the last meeting, the Tigers won their first-ever game in Chapel Hill (Jan. 11, 2020) 79-76 in overtime.

"This was a very rewarding win. I'm super proud of our kids. We really fought and battled," head coach Brad Brownell said. "It takes everything we have to win these kinds of games. We played with tremendous physicality early in the game, and our guys set the tone by making some early shots. We didn't turn the ball over much tonight. We played well the last eight minutes and gritted it out."

"We did a great job defending him," Brownell said. ¥We got him into foul trouble with all of the driving we did. Those fouls really helped us get into the bonus and make some free throws. Defensively, we played at a really high level tonight."

The Heels scored the first points of the game for a quick 2-0 lead, but the Tigers ripped off 11 in a row over the next five minutes to take an 11-2 lead. Chase Hunter later made a 3-pointer that put Clemson ahead 19-9 at the 9:46 mark, and then Clyde Trapp hit a layup to give the Tigers a 15-point cushion at 24-9.

The Heels continued their run early in the second half, and when Kevin Walton nailed a 3-pointer with 13:52 remaining the Tigers led by just four at 40-36. The Heels were in the midst of a 20-10 run at that point as the Clemson offense went cold.

UNC hit a bucket that made it 42-38 with just over nine minutes remaining, and both teams then went over three minutes without scoring. With Clemson later leading 47-42, Simms bullied his way to the rim and hit a short basket that made it 49-42. He was fouled on the play and hit the foul shot and the Tigers led 50-42 with 5:50 left to play.

Both teams again went cold, with the Heels getting one free throw from Day’ron Sharpe and the Tigers getting two from Hunter Tyson, and Clemson led 52-43 with just over four minutes remaining on the clock. Clemson’s defense remained stingy, and when Al-Amir Dawes threw in a one-hander from under the basket Clemson was back in front by double digits at 54-43 with two minutes to play.

Twenty-five seconds later, Tyson broke away for a dunk on the fast break that put an exclamation point on the evening, putting Clemson ahead by the final score of 63-50.