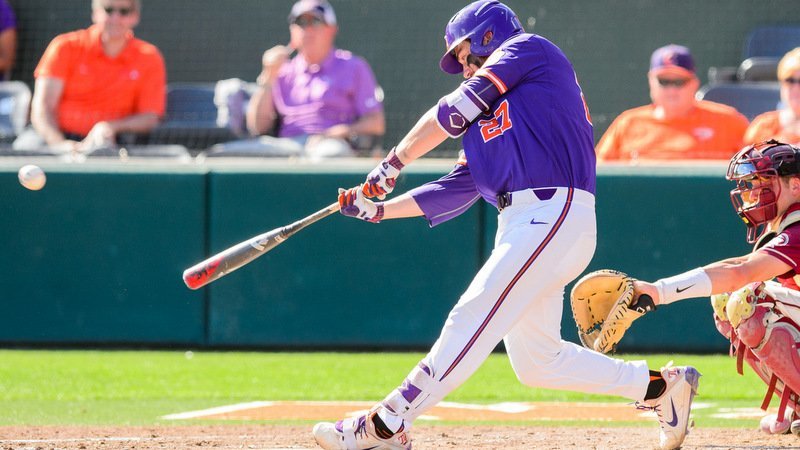 CLEMSON – A warm and breezy Sunday afternoon was just what Clemson’s bats needed.

Grayson Byrd homered and drove in three and No. 6 Clemson hit three homers in defeating No. 15 Florida St. 12-7 at Doug Kingsmore Stadium, evening the series at a game apiece.

Clemson starter Brooks Crawford ran into early trouble – Jackson Lueck and Cal Raleigh each hit solo homers in the bottom of the first that bounced off of the roof of the hitting cages in right for a 2-0 lead.

The Tigers answered in the bottom of the frame. Kyle Wilkie singled with one out, and the bases were quickly loaded after Seth Beer walked and Chris Williams was hit by a pitch. Grayson Byrd struck out for the second out, but Patrick Cromwell ripped a 0-1 pitch into center field that scored Wilkie and Beer and tied the score at 2-2.

The Tigers took their first lead of the series in the bottom of the second Sam Hall led off the inning with a double to left-center that bounced off the glove of the outfielder. Hall came around to score on Davidson’s single to center for a 3-2 lead, but Davidson was once again thrown out on the bases after trying to take second on the throw to the plate.

Florida St. tied the score in the third when Reese Albert homered to center field.

Clemson regained the lead in the bottom of the third. Beer laced a single to right-center to lead off the inning and Williams reached on an error by the third baseman. That brought up Byrd, who launched a three-run homer to left-center for his eighth homer of the season and a 6-3 Clemson lead.

The Tigers weren’t finished in the inning, however. Cromwell singled to right and moved to third on Drew Wharton’s double to left. Hall bounced to short for the first out, but Cromwell scored and Wharton moved to third on the play. Robert Jolly then slapped a single in between short and third, scoring Wharton for an 8-3 Clemson lead.

Raleigh homered in the fourth, his second of the day, to make it 8-4 but once again the Tigers responded in a big way.

Williams homered in the bottom of the fourth, his 14th of the season, to make it 9-4. The floodgates opened in the fifth. Jolly walked with one out and moved to second on Davidson’s single. Wilkie fouled out deep down the first base line, and Jolly took off for third and Davidson for second. The throw got away from the third baseman and rolled into left field, allowing both Jolly and Davidson to score for an 11-4 lead.

That brought up Beer, who rifled a shot into the Cajun Café for a 12-4 lead. It was the 13th homer of the season and 47th of his career, moving him into eighth place all-time in Clemson history, passing Kyle Parker.

Crawford was done after five innings, giving up four runs, all on solo homers. He walked none and struck out five. Crawford earned the win and moved to 6-2 on the season.

The Noles added a single run in the 7th and two in the 8th.

The finale and rubber game of the series is Monday at 7 p.m. and will be broadcast on ESPN2.