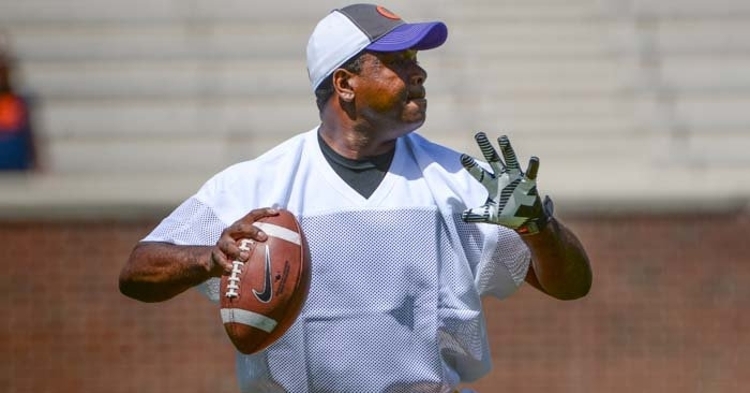 Jordan has been still slinging the ball in the Clemson flag football alumni games.

The TigerNet Top-5 for Clemson football is analyzing the top players by position in the ACC era (1953-on).

The No. 1 for QB in Clemson history isn’t too difficult currently, but there certainly could be some disagreement about the other four spots.

Why he’s here: Jordan was a first-team All-ACC selection and honorable-mention All-America in Clemson’s first national-title season (1981) and went on to total two conference crowns with the Tigers.

Against No. 4 Nebraska for the national championship, Jordan led the underdog No. 1 Tigers (4-points) in holding off the ‘Huskers, getting the ball back up 22-15 with 5:24 left and running the clock down to six seconds left before Nebraska had another chance.

In the run-geared scheme, Jordan was named an Orange Bowl MVP with 134 passing yards and 46 rushing yards, including the TD connection to Perry Tuttle that was forever immortalized in the Sports Illustrated cover.

The Athens, Georgia native led the ACC in yards per pass attempt in both 1980 and 1981 and pass efficiency in 1981. He was named a team MVP for the 1981 season by his teammates. He split time in his senior season with Mike Eppley after knee surgery before the campaign.

Jordan was inducted into the 2017 ACC football Legends class.

Who fills out your top-5 Clemson QBs in the ACC era?