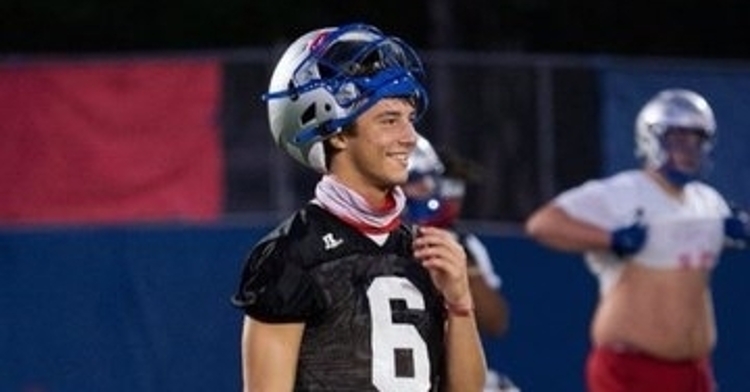 Klubnik will attend this weekend's game.

One of the top quarterbacks in the state of Texas is headed to Clemson for this weekend's game against Syracuse.

Clemson has offered two quarterbacks in the 2022 class thus far in Ty Simpson of Martin, Tennessee, and Braden Davis of Clermont, Florida.

Dabo Swinney, Brandon Streeter, and Tony Elliott are strongly considering a third candidate in the class in Cade Klubnik (6-3 180) of Austin (TX) Westlake. The four-star prospect has talked with the Clemson coaches on the phone a lot, and with an unexpected open date this Friday, he and his parents will visit Saturday for the Syracuse game on their own dime. They’ll be tourists for the weekend unable to visit in person with the coaches due to the NCAA recruiting dead period installed through the end of 2020.

“We’ve been talking about two months now. It’s been going good,” Klubnik said. “I’ve been talking to him (Streeter) and coach Elliott and director of recruiting Coach (Jordan) Sorrells. They are liking what they are seeing. They are liking my style of play, and my character a lot. We’ve grown a pretty good relationship so. They want to keep seeing me play, but most important is getting me on campus soon. That’s the most important thing for them, being able to spend a weekend with them, which unfortunately I won’t be able to do anytime soon. We really want to get to know each other, not just on the phone. That’s really important to them.”

Klubnik is ranked as the No. 10 pro-style quarterback in the 2022 class in the 247Sports Composite. Last season he passed for 680 yards with eight touchdowns and one interception, and he rushed for 271 yards and three scores. This season according to MaxPreps stats, he’s passed for 910 yards and nine touchdowns with zero interceptions, and he’s rushed for 199 yards and five touchdowns.

“He (Streeter) likes my presence in the pocket, how I sit back there and not get crazy feet and wandering all over the place and being able to sit back there,” Klubnik said. “They also like my athleticism. I can move around a little bit and make some plays with my legs if needed. And they really like my accuracy a lot. And being a natural leader, too.”

Klubnik is building an impressive offer list. Right now he has Auburn, Baylor, Arizona, Arizona State, Arkansas, Missouri, North Carolina, Colorado, Utah and Michigan State on his offer sheet. Georgia also has been showing a lot of interest. A Clemson offer might not be far off.

“They seem like they are really warming up to me,” Klubnik said. “They are liking me a lot and they are liking my family. Like I said, most importantly they really want to get me on campus. That’s a big thing for them to be able to spend time with them. Hopefully getting on campus and being able to visit the campus and go to a game will check off the boxes for me and them this weekend. Hopefully in January, or whenever it comes, I can be able to spend some time with Coach Streeter, Coach Swinney and Coach Elliott and really get to know each other better.”

A Clemson offer apparently would shake things up for Klubnik as he weighs all of his options.

“That would mean a ton. We all know who Clemson is,” Klubnik said. “That would be huge for me on all kinds of levels. That will be huge. I don’t even know how to subscribe that. That would be giant. That would definitely have a big impact on my recruiting level of interest. I don’t want to say too much, but it would be big, for sure.”

Clemson has built quite a legacy at the quarterback position during this run of success. It’s been one standout after another under center with Deshaun Watson paving the way for Kelly Bryant who laid the foundation for Trevor Lawrence. And Lawrence is raising the bar high for his expected successor DJ Uiagalelei. How would Klubnik feel about the opportunity to be in that line of succession one day?

“I’d be very honored if somebody ever put me in that line,” Klubnik said. “I would like to hope so, and I don’t think that would come easy. I think it’s just the beginning. Maybe, we’ll see. I think I’ve got to prove myself first and prove that can even be a possibility. Well see.”