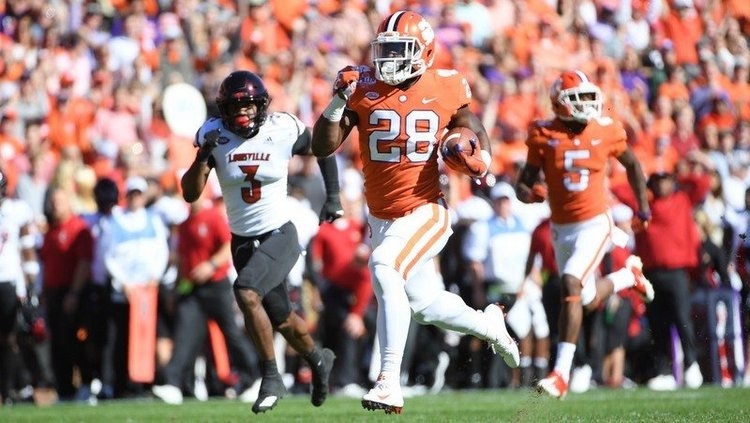 After announcing he will enter the NCAA Transfer Portal, Clemson running back Tavien Feaster has hit a pause button of sorts on his recruitment.

Summer school at Clemson is set to begin this week and the senior needs to get all of his classes in order to ensure he graduates in August and can play right away at his next destination.

“I haven’t really thought about all that yet,” Feaster said. “I’m going to take my time and weigh out all of my options and find the best place for me. You’ve definitely got to check the depth charts. I didn’t think I was in a bad position at Clemson, but personal reasons are why I left. I definitely have to check the depth chart. Can a team provide what I’m looking for, that’s mainly what I’m worried about right there.”

During his Clemson career, Feaster carried the ball 222 times for 1,330 yards rushing and 15 touchdowns, while catching 23 passes for 183 yards and a score in 674 total snaps over 41 career games (11 starts). The Spartanburg native ranks second in Clemson history in career yards per carry (5.99) behind only former teammate Travis Etienne.

Feaster was behind Etienne on Clemson’s running back depth chart after spring practice with sophomore Lyn-J Dixon bearing down, but he said he’s not looking to go to a school where he’s the featured talent.

Alabama, Oklahoma and South Carolina have all been linked to Feaster since his announcement and he said he would be okay with possibly squaring off against his former Clemson teammates because they understand the decision he had to make.

“To me, it wouldn’t be weird,” Feaster said. “Those are my guys down there, you know. They understood the situation. Before I left, I spoke with my guys and told them the situation, and this was best for me. Everybody agreed. It is what it is. If I have to see them down the road, that’s just the way it will have to be. Like old times, like old practice times, I guess.”

As for South Carolina, Feaster said he must set the rivalry aside and look at the opportunity that lies ahead.

“They are recruiting me like most teams. Obviously, they want to talk to me and see where I’m at with everything,” Feaster said. “That’s really how it’s been with everybody. Everybody is seeing where my head is and where I’m at with everything. But, I look at it (UofSC) as a place that’s providing me with an opportunity to better myself and better my future. I haven’t really looked at it from a fan’s aspect because that’s not my job and that’s not what I’m doing it for. That doesn’t really matter to me. What really matters to me is that I go to a place that’s going to use me and play me in the way that I need to be played. Checks all the marks that I need to check.”

Other schools Feaster is hearing from include: Virginia Tech, East Carolina and Texas.