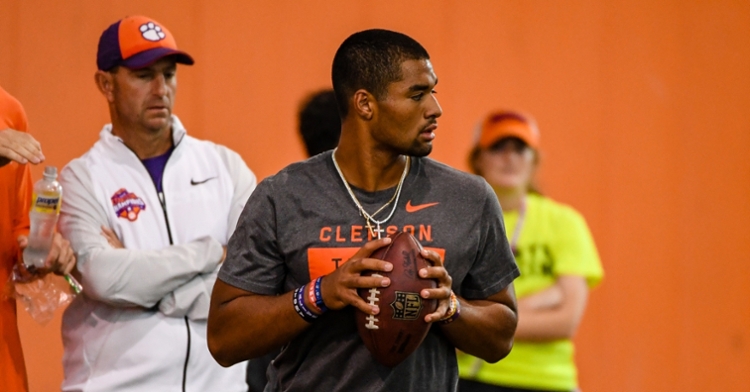 Swinney watches Uiagalelei throw for the first time in camp.

Clemson head coach Dabo Swinney told the media this week that he remembers the first time he saw quarterback DJ Uiagalelei throw in person, and his first thought was that he needed to move some wide receivers around before someone got hurt.

Uiagalelei, a true freshman quarterback, announced his presence to the nation last weekend when he led No. 1 Clemson back from an 18-point deficit to a 34-28 victory over Boston College. His arm strength and poise were on display as he finished with 341 passing yards, two touchdowns and no interceptions, including turning the game in the third quarter with a 30-yard touchdown run on a fourth down and hitting Amari Rodgers for an eight-yard touchdown pass. He finished 30-for-41 passing on the day.

He gets another chance at starting this week when Clemson travels to South Bend, Indiana to take on Notre Dame (7:30 pm, NBC).

Uiagalelei committed to Clemson in early May of 2019, but it all started with a trip by defensive coordinator Brent Venables to California.

"We don't waste a lot of time in recruiting. We will check on every great player, but we don't like to practice recruiting,” Swinney said earlier this week. “Brent was out there (California) recruiting a linebacker. The coach, Coach (Jason) Negro there at Bosco – what a great guy he is - I think said something to Brent like, 'Hey, I've got this quarterback. He's pretty dadgum good.' He had like 70 offers at the time But Clemson hadn't offered him. And we just don't offer guys, especially at that position without knowing much about them. The coach told Brent that he really liked Clemson.”

“He reached out to Brandon Streeter who looked at him (Uiagalelei). Brandon said he looked like a great player, but would he really be interested in Clemson,” Swinney said. “The coach told us again that D.J. loved Clemson and he really wants y'all to recruit him. So, Streeter went out there and we started recruiting him. Once we started talking to him, we could tell quickly that he was very honest sincere from the get-go in why he was interested in Clemson. He came in the summer to our camp. It was probably that summer that we first realized we had a real shot with this kid. He is a special, special talent. He told me pretty early that he felt like Clemson was where he belonged but is very intentional and wanted to make sure. I'm really glad we've got him."

Uiagalelei’s visit to Swinney’s camp left an impression on the Tigers’ head coach.

“It was unbelievably impressive. He is big and he was big the first time I met him. His hands are huge. The first time I saw him throw the ball, he didn't even grab the laces,” Swinney said. “He is just ripping it. In camp, you get guys and you get them lined up. we don't have helmets on, and we have 1500 kids there and you try and get them by class, seniors and juniors. And DJ was a junior. Jeff Scott was here and quickly went over and said, 'Hey, somebody is going to get hurt. He can't throw the ball to just anybody. It was just different. He has a cannon and I think he was trying to show it off when he got here. It was a tough sight to watch, some of those guys trying to catch those balls. My first thought was, I need to adjust this wideout line here to give us a little better chance. He has a gift. Not many people can throw the football like he can.”