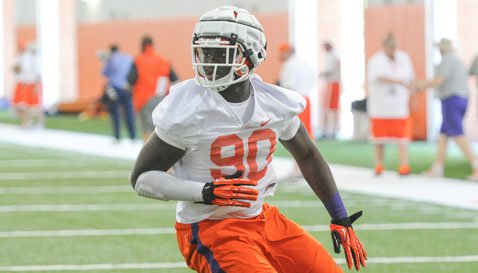 SUNSET, SC – When it was finally Marion Hobby

As I sat there and listened to the usual questions being asked – height, weight, how they did in practice – I quickly realized that all of the assembled media at The Reserve at Lake Keowee for Dabo Swinney

Hobby – Clemson’s defensive ends coach – even seemed sort of surprised when it took so long to ask about the sophomore end who burst onto the scene last season after registering 35 tackles 10 tackles for loss, four sacks, nine quarterback pressures, and one pass breakup.

Hobby says he won’t be the one that will keep the talented sophomore off the field – it will be up to the upperclassmen to play well enough to keep Lawson on the sidelines, something he doesn’t think is possible.

Lawson, who spent a year at Hargrave Military Academy, came in last year on a mission to make the most of his opportunity after growing in his maturity and physically during his time in prep school.

“No question. You look at the guys that we’ve gotten out of prep school – Corey, Kevin Dodd, Shaq – just in my meeting room,” Hobby said. “When I was at Ole Miss, I was fortunate enough to have some guys that came out of Hargrave. Their structure, their commitment, everything was different. There were a lot things that you didn’t have to worry about with them because they already had that structure.”

However, Hobby said that the 6-3, 270-pounder needs to continue to improve his conditioning.

“Just getting in great shape. I always talk about the ‘Freshmen Feet.’ They still aren’t moving as good and have heavy feet,” Hobby said. “They’ve put on some natural weight and they have to get used to it. He just has to get into great shape in this conditioning program, that’s the biggest thing he has to work on.”

The Clemson defensive line will take a major hit after this season – Beasley, Grady Jarrett

Josh Watson
RS Sr. Defensive Tackle
#91 6-4, 285
Wilmington, DE
View Full Profile are all seniors and will graduate at some point this season, leaving Lawson as the anchor of the line in 2015.

However, because he spent that year at Hargrave and will have two years at Clemson once the season is concluded, Lawson will have the opportunity to declare for the NFL Draft, something that most Clemson fans would prefer to not think about.

Hobby, on the other hand, has to think about it and he thinks that the future starting defensive end doesn’t need to look too far ahead.

“Why would he want to do something like that? When you’re talking about guys leaving early, the thing I’m talking about is that if I’m working with you then we’ll put time in together,” Hobby said. “You owe me, as well I owe you. I want those guys to graduate from college. I think that’s the key. Him being a young guy, talent alone, maybe. Long term goals – we try not to have that conversation too soon. He is a very gifted football player. It does not go unnoticed in my meeting room. It does not go unnoticed in our staff meetings. He’s gifted. He works at it.”