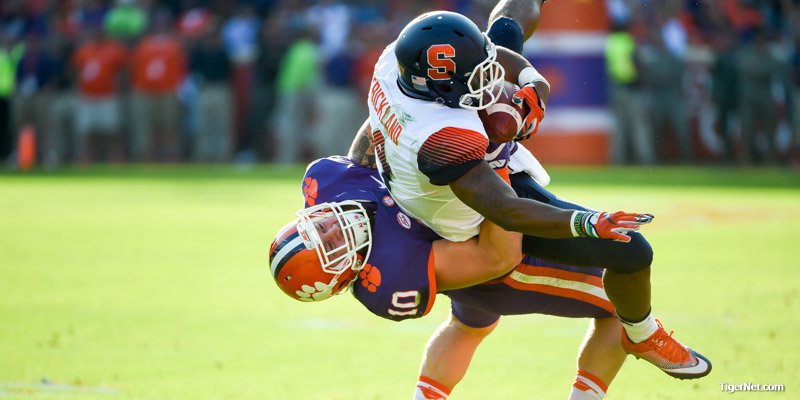 CLEMSON – Ryan Carter was seeing things in slow motion, Syracuse was calling out Clemson’s offensive plays, Deon Cain had to watch a replay to know he’d made a catch and Ben Boulware is wondering if the WWE will contact him.

Clemson’s players and coaches were obviously excited about the 54-0 shellacking of Syracuse Saturday afternoon, and we have plenty of quotes and notes from the hallway outside the locker room.

We’ll start with defensive back Ryan Carter, who snagged an early interception that set up Clemson’s first touchdown. Carter said he had to read the quarterback and then make a play.

“It was kind of a trap, the same kind of play that Deshaun (Watson) got picked off on against NC State and Florida St.,” Carter said. “I was playing nickel, and I was reading the quarterback when he faked the handoff to the running back. If he hands it off, that’s my trigger to attack the run. But I saw him pull it out, and I sat back, expecting them to run the quick slant.”

How easy was the interception?

“Man, that was the easiest pick I’ve ever had,” he said. “It was like it was coming in slow motion. All I was thinking was that I couldn’t drop it. I could have scored, but I cut it back the wrong way.”

“On one play, they were calling an inside run, and I didn’t think we’d be able to convert,” one of the linemen said. “But we got 11 yards on it, so they really couldn’t stop it even if they knew it was coming. So I guess that’s good.”

*Wide receiver Deon Cain said his 65-yard touchdown reception was his favorite play of the game, but his sideline catch from Nick Schuessler was a close second.

“On the touchdown, they were playing a Cover 3 and I still got behind the defense,” Cain said. “So that was special. Deshaun has been making those throws in practice, so it was good to see him get one in the game. My mentality is to always catch it and score, so I'm really just trying to stay consistent every time I get the ball and make the opportunities that I get count. There aren't too many that are going to come my way, so I'm just trying to make each one of them count.

"That was a beautiful pass from Deshaun. It was right on point, and it actually felt good. We are just trying to stay consistent on our deep balls and keep it going because I'm coming down with it.”

The sideline catch resonates, however.

“But that sideline catch – I was looking at it on the replay, and it looks like I made a one-handed catch,” Cain said. “I had no idea I caught that with one hand.”

*Boulware was asked about his tackle of a Syracuse receiver early in the game where he picked the receiver up off the ground and made a suplex-like tackle.

“They'll (WWE) probably contact me,” Boulware said. “He was trying to get an extra yard, and I'm behind him, and I'm not just going to let him go. I've got to get him down some way, and I'm behind him, so I'm going to try to pull him back. It happened to be that way. It's football. It is what it is.

*Tanner Muse also had a big interception, returning his for a touchdown.

“I caught it, and I saw a lot of green grass, and my teammates were blocking for me as hard as they could, so I knew as long I had them in front of me I could score,” Muse said. “It was an incredible feeling especially when I see all of my teammates running as fast as they can to come celebrate with me. It was an unreal experience.”

He also had a big hit on special teams early in the game.

“They told me on Wednesday that I'd be getting first team reps,” Pollard said. “They just told me to be ready if they did need me to start and prepare to go in quickly. I thought I played pretty good. I made a couple of mistakes like everybody does, but other than that, I thought I did pretty good.”

Pollard got the start because starter Jake Fruhmorgen has been battling a shoulder injury suffered at Florida St. last week, but Pollard doesn’t want to settle for being second string.

“I battle every day (for the starting job),” he said. “We both challenge each other every day, and that's what makes us better players.”