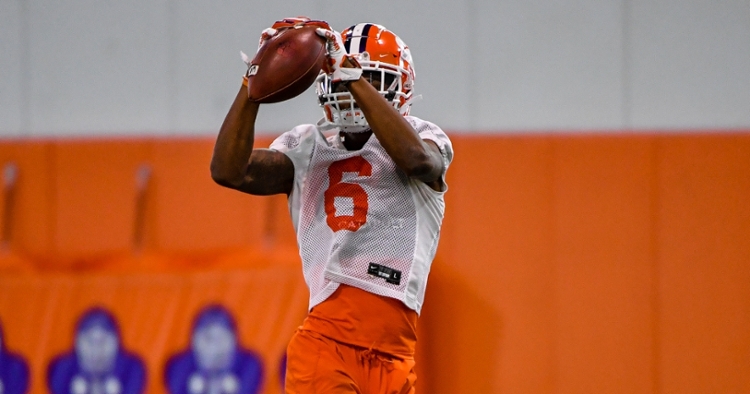 Freshman EJ Williams should play a big role this season.

Clemson head coach Dabo Swinney told the media Monday that wide receiver Justyn Ross is scheduled for neck and spine surgery on Friday and is out for the season. The condition needing surgery was found after a spring practice.

“He caught a pass, nothing crazy – he caught a slant and got hit and was slow to get up,” Swinney said. “He had stinger symptoms (in his neck), a little bit of numbness, which is not uncommon in the game of football. I saw him that night and he was fine. But (trainer) Danny (Poole) came into my office the next morning and said, ‘You aren’t going to believe this.’”

X-rays revealed a “congenital fusion," which is an abnormal fusion of any two of the seven bones in the neck.

“It created some questions for our medical people,” Swinney said. “He’ll be out this year. He won’t be able to play this fall. But he’s in a great place mentally. He can run and jump and dunk a basketball, and if he was an accountant, as he would be back in six weeks.”

Ross was set to be the team’s top returning receiver after making 66 receptions last season. He had 865 receiving yards and eight touchdowns.

As a freshman in 2018, Ross instantly became one of the top pass catchers for the Tigers. He finished the year with 46 receptions for 1,000 yards and nine touchdowns, picking up a national title ring in the process.

So who steps up in the absence of Ross?

“Injuries are a part of the game of football for sure, and every player understands that. It's something that we have been dealing with for a while, since early April as far as the realization that he will probably be out in the fall,” Swinney said. “But he have a great group. Obviously, Frank Ladson and Joseph Ngata and Brannon Spector were three guys from last year's class that we are excited about. And Joseph and Frank were able to get some great experience. Brannon, we were able to redshirt.”

Freshman EJ Williams hails from the same high school as Ross and was able to participate in spring practice.

“It was huge getting EJ Williams in. EJ got a lot of great work this spring,” Swinney said. “Having EJ in the spring was great for him. He is very similar to Ross, maybe a little faster, but very similar type of player and talent. So, we are fortunate that we have some good guys. And then obviously Amari (Rodgers) and Cornell (Powell) bring some great veteran leadership there and will be counted on that. And Will Swinney and Will Brown, two guys that were having good springs for us, will be counted on for depth as well. We have a good group and we are excited and then we have more coming. It will put a lot on Tyler Grisham's plate and my plate to make sure we have them ready.”

Class of 2020 signee Ajou Ajou will be on campus this summer.

“We have Ajou Ajou showing up this summer, who is another great young talent. But with all of this, a positive of this Covid situation is that we have been able to have so much time from a football meeting standpoint and that has been incredibly valuable for us,” Swinney said. “To be able to have to the opportunity to go through our installation multiple times and go through our individual stuff is huge. The biggest thing with the young players is knowledge and to have Ajou sitting in on those meetings and to have EJ bridging that gap a little bit has been very helpful.

“And then you look at Cornell Powell and he was the most consistent guy this spring. It was awesome to see that. So hopefully he will rise up and take advantage of this opportunity in a big way. We have a great group and you have to get the next guy ready, and we're fortunate that we have multiple guys who can play multiple positions and be excited about the opportunity. Justyn has been great. I expect him to be one of the best coaches we have this fall in helping get these guys ready, because it's important to him and he loves these guys.”