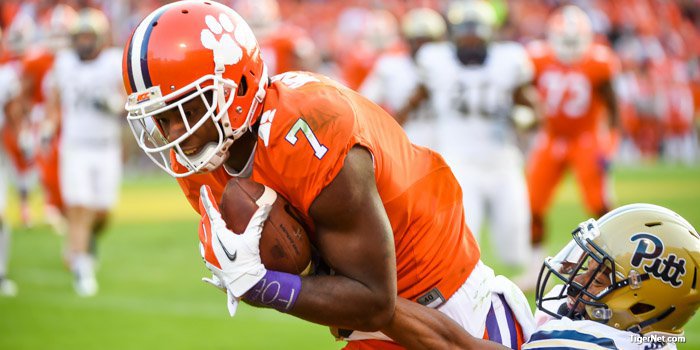 CLEMSON – Clemson ended Saturday’s loss to Pitt with the kind of stats any offensive coach would be proud of.

But the most important stat of all is on the scoreboard, and the Tigers fell a point short in the 43-42 loss to the Panthers. Quarterback Deshaun Watson threw three interceptions, including two in the end zone, and the Tigers failed to convert a late fourth down in the loss, something that offensive coordinator Jeff Scott admits helped cost Clemson a win.

"Yeah, it doesn't help the feeling any,” Scott said. “The guys fought their tail off, and I felt like we played hard all the way through the end and moved the ball a lot, but this game isn't about yards and all that. It's about points, and we had some opportunities down there in the red zone and didn't away with any points, and when you do that against a good team like Pitt, it's going to cost you, and that's what happened tonight."

On the fateful fourth down call, the Tigers went with their jumbo package, but running back Wayne Gallman was stuffed on the play and Scott was asked if the coaches had any thought of leaving the outcome in the hands of Watson.

"You know we did some of the stuff we've done all year,” he said. “That heavy set that we were in right there, I think we were five-for-five at that point, and you've got to give them credit because they were ready. Earlier in the game, we went with the downhill run, so we tried to set it up and go outside, and they made the play, and we didn't so you've got to give them credit."

“I mean we'll have to go back and watch the video. I think in that situation everyone knew we were getting ready to run it and exactly where the ball was gonna go and we're going to have to go back on video and see why we didn't execute, but we went with what kind of got us here."

Scott said there was a lot of pain in the locker room.

"Obviously it was hurt. There are a lot of guys in there that are hurting, and this is an opportunity to see how we're going to respond,” he said. “I think each and every one of those guys are competitors and even though it doesn't feel good right now, it's an opportunity to get through adversity and there's been plenty of opportunities over the last few years for teams that've lost and come back, so there's a lot ahead of us."

"We got two freshmen tackles out there, and I felt like they did a pretty good job,” Scott said. “We just didn't have many sacks there. We've got to give those two guys credit, going in there and playing the whole game. We'll go back and watch the video to see how those guys did."

As for the turnovers in the red zone, Scott said it was only matter of time before it caught up with the Tigers.