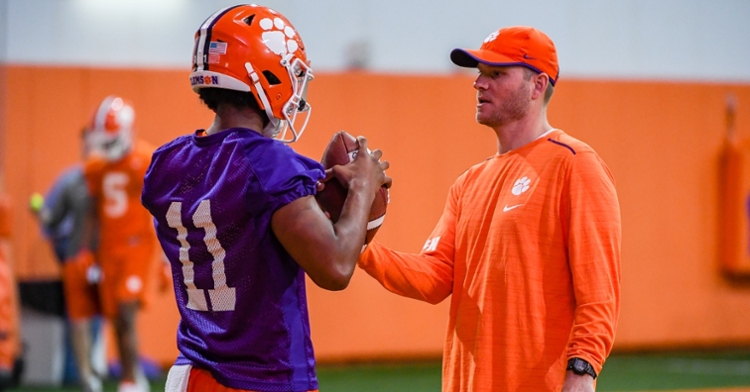 Streeter loves what he's seen out of Phommachanh.

Fall camp starts this week and even though we don’t know the first opponent, or even a date and time -- we can take a look at the ten position groups heading into the week.

As always, we will start with the quarterbacks, where Clemson has an edge on everybody else in the country. Why? Because the Tigers have the best quarterback in the country in Trevor Lawrence and a stable of talented backups.

Lawrence has a chance –- a chance -- to bring home the Triple Crown in what might be his final season on campus (he will graduate in December). Lawrence can win the Heisman Trophy, a National Championship and become the top pick in the NFL Draft next spring.

Lawrence enters 2020 having completed 527-of-804 career passes for 6,945 yards with 66 touchdowns and 12 interceptions in 1,610 snaps in 30 career games (26 starts). He also enters 2020 with 967 rushing yards and 10 rushing touchdowns on 163 career carries. The only loss of his collegiate career was the setback to LSU In the title game in January, and he’s ready to put that firmly in the rearview mirror. He said he took time to dissect the game and his part in it but is now ready to move forward with a new season.

There will be a battle for the backup spot between Phommachanh and Uiagalelei. Phommachanh has been in the system for well over a year and was making strides during the spring and impressed quarterbacks coach Brandon Streeter with his offseason work. Phommachanh appeared in three games this season and carried the ball 12 times for 56 yards. He completed 6-of-12 passes for 56 yards and an interception. Despite the lack of playing time and reps in practice, Streeter urged his freshman to take every opportunity to learn.

“It was very important for a young kid that came from a small school. To put that pressure on him, even when it was at the end of games, was important,” Streeter said. “It was a very big deal for him to get that experience. That was a tremendous amount of experience for him to get in there and feel what it's like to get hit by a college player.”

Uiagalelei is the former 5-star with all of the arm talent and swag who needed to earn playing time this season, and he impressed everyone during the nine spring practices. Even Lawrence took notice.

“He looks good,” Lawrence said this spring. “Just kind of the way he carries himself, I feel like we’re similar in that way. So, we’ve got a good relationship, and obviously he’s a great player. He’s picking it up quickly. That’s the one thing I can tell is just he knows football. He gets it. It clicks quickly with him. Even though he doesn’t know all the plays yet, when he sees them once or twice, he’s already learning them and getting them down. So really smart, just a natural. He’s got a knack for the game. So, he’s going to be great.”

Head coach Dabo Swinney loved what he saw out of the California native.

Streeter said Uiagalelei is exactly what you want in a quarterback.

“Just an awesome kid character-wise. We have known that for a couple of years since we started recruiting him. He comes from a great family and he is the type of kid you really love to have,” Streeter said this spring. “You have to love his size - he is a good 6-4, 245, and he is a kid that can move and he has incredible arm strength and the ability to throw the ball.