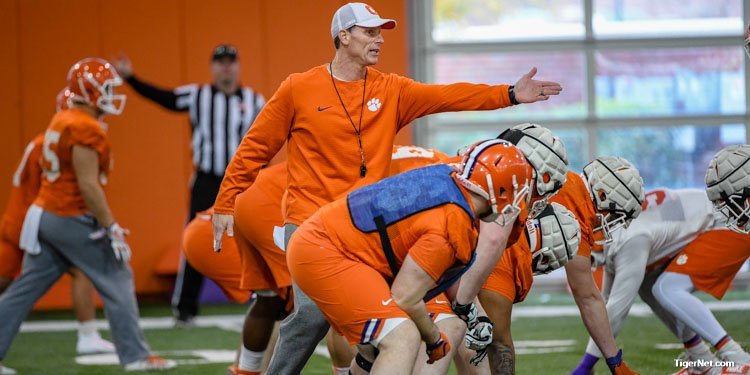 CLEMSON – Santa Claus Is Comin’ To Town blared from the speakers as No. 2 Clemson started bowl practice Wednesday, and while the Tigers aren’t quite ready for the bearded wonder to show up bearing the gift of a College Football Playoff victory, it was a good start.

The team spent the first part of the practice going through the usual stretching exercises, special teams work and some positional drills. The assembled media were allowed to watch the first three periods, and while there isn’t a lot to glean from that short amount of time there a few nuggets to pass along.

We will start with left tackle Mitch Hyatt, who donned a yellow jersey and worked outside with a member of the strength and conditioning staff during the first part of practice. Head coach Dabo Swinney told the media after practice that Hyatt was fine and was simply the recipient of a well-deserved day off.

In Hyatt’s absence, Jackson Carman moved over to left tackle. I continue to be impressed with the strides Carman has made since arriving on campus last January. He was a little too heavy when he got here and it made for a slow start to the spring. However, everything started to click for Carman during the season and he played a big role in the win at Boston College when the Tigers clinched the ACC Atlantic Division title.

During one drill Wednesday he showed exceptional footwork for a man his size. Will Clemson miss Mitch Hyatt? Of course. But Carman will be just fine.

*Typically it’s the latter part of bowl practice when we watch the redshirt freshmen, but I wanted to take a look at a few of them. Let’s start with Justin Mascoll, the Kevin Dodd lookalike. Wednesday was the first time in a while I’ve gotten to see Mascoll up close, and it’s obvious that Power Hour with Joey Batson has been good for Mascoll. Another defensive end that’s put in work is KJ Henry, who looks stronger in his lower body.

For those wondering – Swinney reiterated that Henry has played in his four games and the coaches hope to keep his redshirt.

*Jordan McFadden played left tackle during one drill and held his own against Clelin Ferrell. He’s another one that has benefitted from the redshirt year.

*I love watching Brent Venables coach. It’s obvious he loves what he does. One of the national beat writers tweeted out Wednesday that he knows of two head coach openings that Venables turned down recently, and I asked Swinney what keeps Venables in Clemson.

Swinney laughed and said, “All of you in the media. He would miss you guys.”

Swinney then turned serious and said, "There's nothing wrong with being the best at what you do and being passionate about it. He is driven by pushing people backwards. It would take a very special situation to pry him out of here.”