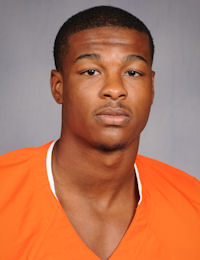 Defensive Back
B I O
Overview: Returning starter in the secondary who has moved from strong safety to cornerback for the 2010 season...winner of the Solid Rock Award for defensive backs as voted on by the Clemson coaches for 2009...Clemson's second-leading tackler last season and first among returning players...finished 14th in the ACC in tackles per game...set Clemson record for plays by a defensive player in a season with 902...previous mark was 881 set by Charles Hafley in 2001...has not missed a game in three years, he has played 40 in a row entering his senior season...does not have an interception, but had six passes broken up in 2009, and nine for his career...also a capable return man, he has 165 career kickoff return yards and 28 punt return yards and with graduation of Jacoby Ford and C.J. Spiller, he will see more action in the return game in 2010...averaged a tackle every 9.02 plays in 2009, 10th best on the team and seventh best among returning players for 2010...won Strength Training Award for cornerbacks for the spring practice of 2010...third-team preseason All-ACC by Phil Steele...first on the team in the power index with a 7.42 figure, meaning he is Clemson's strongest player pound for pound...tied for fourth on the team in the vertical leap with a 37-inch mark...fourth on the team in the broad jump with a leap of 10'1".

2009: Had 71 first hits in 2009, second-best on the Tiger team, just seven behind linebacker Kavell Conner...finished the season strong with eight tackles in the win over Kentucky in the Music City Bowl...had four games with double figures in tackles...had 10 against TCU in 71 plays as a starter, 11 against Miami (FL), including a tackle for loss, contributing to overtime win over the #8 team in the nation, 11 against Virginia and 13 against Georgia Tech in the ACC Championship game...so three of his four double-figure performances were against top 10 teams...had eight stops against Georgia Tech in the first meeting, so he had 21 in two games against the Yellow Jackets...in addition to his 11 stops at #8 Miami, he had a sack, a caused fumble and a recovered fumble...Clemson's top tackler against TCU, Miami (FL) and Georgia Tech in the ACC Championship game...started every game and played 902 snaps, the most snaps on the team.

2008: Made his first career start and played 30 snaps against Georgia Tech when the Tigers had a special defense for its running game; he also had a 46-yard kickoff return...had a season-high three tackles against both The Citadel and #24 Florida State...had at least one tackle in 11 games, including each of the last seven...averaged 20 snaps per game...had two tackles in 25 snaps at Boston College...had three first hits in 16 snaps against Nebraska in the Gator Bowl...had 14 of his 21 tackles in the last seven games.

2007: Saw a lot of action as a second-team cornerback and contributed in the return game...played all 13 games; he played on defense in 11 games, including double-figures in snaps in each of the last five games...played 26 snaps against Wake Forest and had a season-high five tackles...played 25 snaps against Central Michigan and had four tackles...had a 66-yard kickoff return that set up a score at Duke; also had three tackles in 23 snaps...played just 12 snaps in the first five games and 147 in the last eight...had his only pass breakup at Maryland and had a recovered fumble at South Carolina.