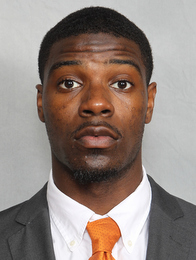 Wide Receiver
B I O
Enrolled at Clemson in January and will compete for playing time at wide receiver at spring practice in 2014...spent this past fall at Fork Union Military.

Before Clemson: Ranked as the #3 prep school player in the nation in 2013 according to 247Sports.com...same service listed Priester as first among prep school wide receivers...three-star wide receiver according to Rivals.com coming out of high school...had 56 receptions for 1,116 yards and 13 receiving touchdowns in 2012, his senior season at Brookwood High School...ranked as #170 player in the nation by ESPN.com coming out of high school...ESPN.com also listed him as 20th best wide receiver and 19th best player from state of Georgia...PrepStar All-Southeast Region selection...had 31-565 and five scores as a junior...recruited to Clemson by Mike Reed and Tony Elliott...majoring in PRTM at Clemson...recruited by Tony Elliott...also had offers from Georgia, Ohio State, NC State and Mississippi...played for coach Mark Crews at Brookwood High School...played for John Shuman at Fork Union.