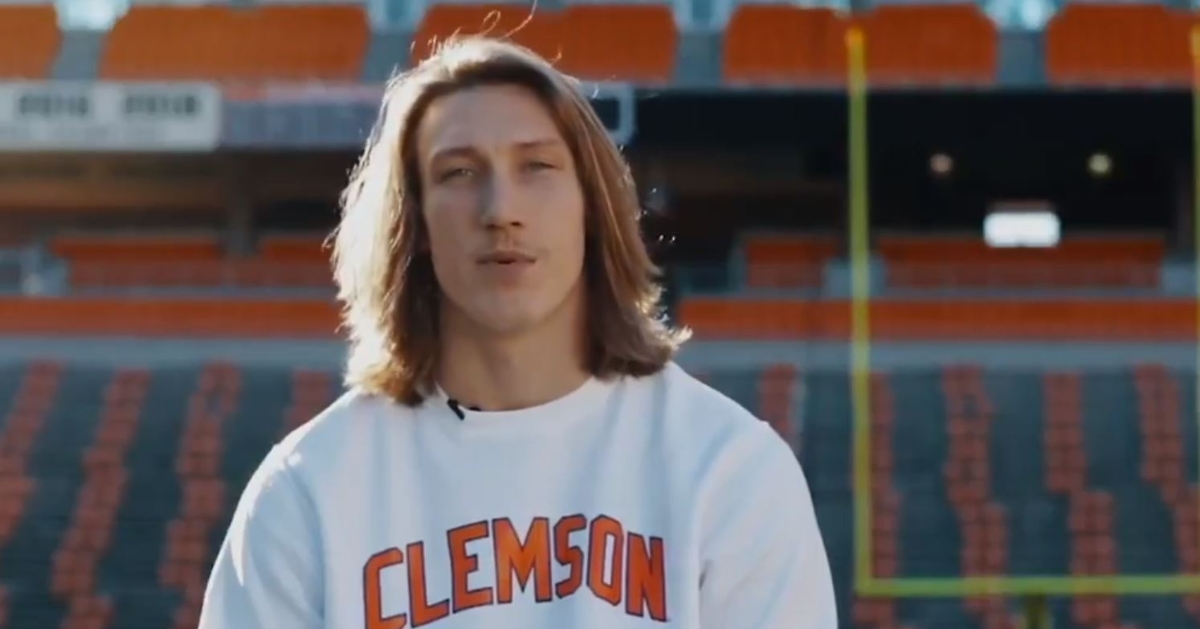 Trevor Lawrence is grateful for his time at Clemson

Clemson quarterback Trevor Lawrence released a heartfelt video on Wednesday morning saying that he is ready for his next challenge pertaining to the 2021 NFL Draft.

"When I look at my life so far -- this journey of 21 years, the most formative years have been my time at Clemson," Lawrence said. "It's taught me how to be a better man, no doubt...I really feel like I'm a man now, and I'm ready to take on those challenges, and I'm just super-excited for life ahead. The best is always yet to come. I'm grateful for Clemson, and I'm gonna miss it...My time here has been amazing, and I'm going to be a Clemson Tiger forever."

Twitter was abuzz with different people applauding Lawrence for his impressive time at Clemson as a student-athlete.

Check out some of the reaction below:

Humble. Class. Integrity. Character. The entire package. Can’t wait to see you lead your NFL team like you lead the Tigers https://t.co/VLNciuEonQ

"With the right coach and GM, Trevor Lawrence is going to win Super Bowls." @ColinCowherd on why the Clemson QB makes his list of all-time can't miss prospects: pic.twitter.com/MkrZayvsD7

Thank you for all that you have done for the Clemson Tigers community T Law but too me and more importantly, thank u for taking DJ under your wing and guiding him. Can't wait to see you ball out in the league and representing Clemson football well like so many #AllIn #GoTigers https://t.co/WwSKMvtME5

In his last college offseason, Trevor Lawrence was the face of the #WeWantToPlay movement, created a COVID-19 relief fund for local communities, and helped organize a march for social change.

I always knew @Trevorlawrencee was good, but today he even created a new wrinkle. He pulled the “10:01” on #PackerAndDurham - most have only been able to go 10:05, but not #16. Congrats on a great Tiger career. See you on Sunday’s next fall. @accnetwork @MarkPacker @ClemsonFB https://t.co/4QeaswkNcw

During my first year covering Clemson football while working at @wyffnews4, I remember being constantly in awe of what Trevor Lawrence was doing as a freshman. It’s been an honor to watch him play these last three years. Generational talent, class act. Wish him all the best. pic.twitter.com/4B69GT0J38

As @ClemsonFB likes to say: The best is yet to come ????@Trevorlawrencee has officially declared for the NFL Draft! pic.twitter.com/p7se0lpyQx

Clemson QB Trevor Lawrence has officially announced he is entering the NFL draft.

Lawrence finishes his college career with a 34-2 record as a starter, which is the 5th-best in FBS history among QBs with at least 30 starts and 3rd-best since the FBS/FCS split in 1978. pic.twitter.com/gS657r7UVw

Trevor Lawrence never actually said in that video that he’s declaring for the NFL Draft. For all we know, he’s leaving Clemson to go on some spiritual journey.

this isn’t surprising so I’ll use this platform to give credit where it’s due: the Clemson all purple uni’s go very hard https://t.co/EPoBYSo04Q

Thank you, Trevor... your legacy and luscious locks will be remembered forever by the Clemson Family. Go get that bag, sir. https://t.co/yc2WvMC0nR

I will always have respect for Trevor and what he accomplished in his Clemson career. https://t.co/dEm2WlW1YR

In light of Trevor Lawrence's decision to go pro, I looked up what kind of records he had at Clemson while only being there three years, and was reminded of how UNREAL Deshaun Watson was in his three seasons at Clemson. pic.twitter.com/Ndq6Mm4cPO

As the projected #1 overall pick, Lawrence will receive a ~$37M contract with a $20M+ signing bonus.

Trevor says the most formative years of his life have taken place at Clemson and that he will miss it.
The Heisman runner-up & ACC player of the year will almost certainly be the Tigers first ever, NFL 1st overall pick on April 29th.@WSPA7 https://t.co/qLn1Lo2ReW

He came in expected to be the best football player on the planet and he managed to somehow exceed expectations. Good luck to an awesome talent and dude. https://t.co/zslwyZGxlO