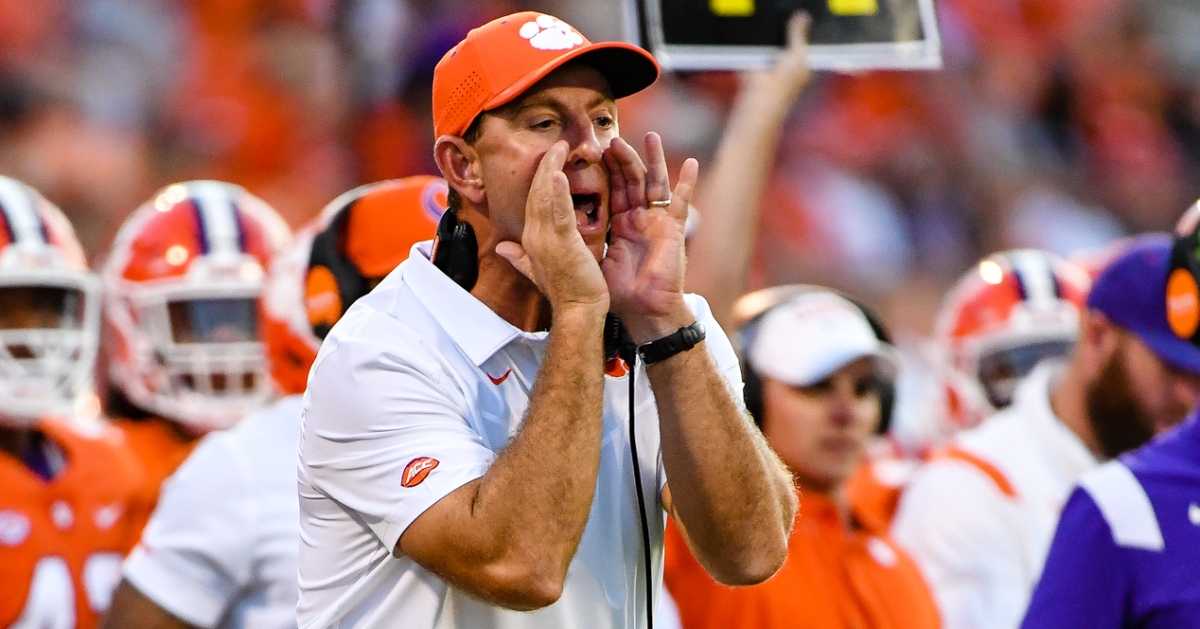 Swinney went into a passionate defense of how they operate with the transfer portal.

Clemson's use of the transfer portal -- or lack thereof -- has come under the spotlight as analysts seek to figure out why the perennial Playoff contender has stumbled out of the blocks in 2021.

ESPN College GameDay analyst David Pollack referenced a couple of times heading into last weekend that Clemson had 20 players go into the transfer portal in recent years while not using the portal to add any Tigers.

Tigers head coach Dabo Swinney was asked about the comments Monday and went into a lengthy defense of how the program builds its roster.

"We’ve always been a developmental program," Swinney said on his call-in show. "The game has changed this past year for freshmen and sophomores and all that. We’ve had guys here who were backups who wanted to go somewhere and start. Kids that enter the portal -- 99 percent of them are in the portal -- well for multiple reasons but most of them want to go somewhere to start. There’s nobody in there that we felt like that fit that for us. Again, it’s been a gamechanger (with the one-time transfer change now). I’ve said many times -- we’re always going to be a developmental program and evaluate well. I think what we’ve done around here has worked. We might not make it to a seventh Playoff in a row. It might not happen.

Swinney likes the roster they have and that's a reason they aren't in the portal searching.

"It’s not that you’re reluctant to do anything, but you don’t just change to change," said Swinney. "If there’s a strategic need for something, absolutely, because as things change you have to adapt if needed. But you don’t just change to change. That’s silly. People say, well we got beat by a transfer quarterback. Well, ok, do we want to get rid of Trevor Lawrence? I mean, c’mon. We love our running backs. We love every position that we have. We love the offensive linemen that we have. We’ve evaluated everything. We got one of the top guys in the country in Tristan Leigh this past year -- and he’s gonna turn out to be a great one. Marcus Tate is a true freshman who’s gonna be great one."

Clemson had a pair of starters off of last year's defense go elsewhere in Mike Jones Jr (LSU) and Derion Kendrick (Georgia; described as a mutual parting by Swinney this winter), but for the most part, he reiterated that they've lost players seeking more playing time.

"The biggest thing for me when it comes to the portal that has changed is that now kids can leave your program," Swinney said. "The guys who have left our program have been guys who were backups here. So, there’s a reason why. It’s not like we’ve had a bunch of starters pack up and leave. The only thing that is going to change us is if we’ve had starters pack up and leaving or we had a bunch of young players pack up and leave...For us, if it was something strategically made us better that we had a glaring need because of an exodus of a group of players or young players or whatever -- we just kinda get caught up in a weird situation like injuries, we’re open to anything. We’re not going to change to change doing all these things. It’s a week by week, month by month and day by day process when it comes to managing a roster...

"We have a very, very talented roster. It’s something that I keep my pulse on 24/7. We’re always going to do what we need to compete at the highest level. That’s what we’ve done for a long, long time and we’re going to continue to do that...We’ll always do what’s best for Clemson."