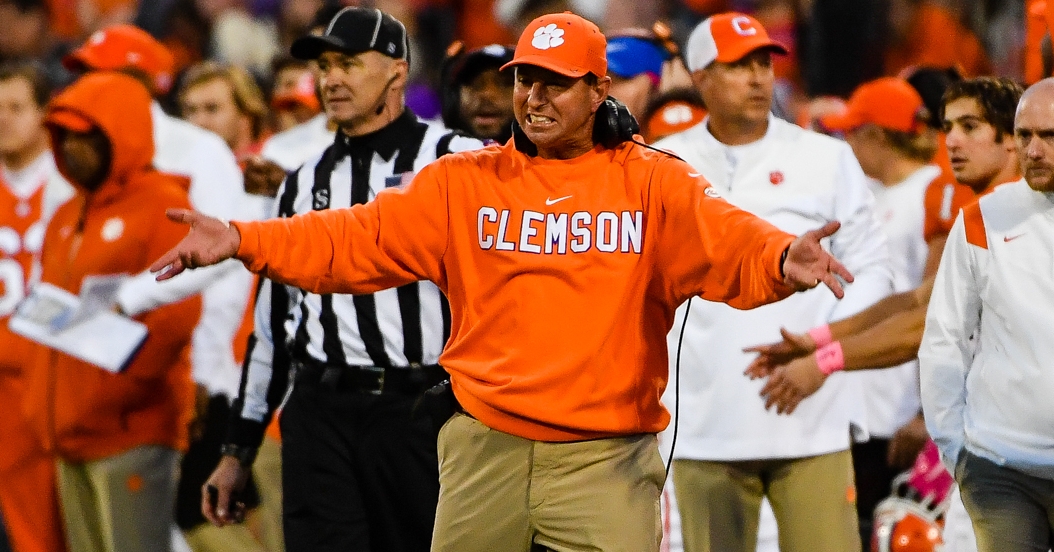 Back in the Playoff? Out of the top-10? There is little consensus for 2022 way-too-early.

Opinions vary quite a few spots for Clemson's way-too-early 2022 outlook.

There are some that have Dabo Swinney's Tigers returning to the Playoff tier, with Sporting News (4), Sports Illustrated (4) and Athlon (4).

"Coach Dabo Swinney’s team won 10 games for the 11th year in a row despite an offense that managed only 26.3 points a game and ranked last in the ACC in yards per play (5.2)," Athlon said. "Change also is in the air for Clemson this offseason. The Tigers will have new play-callers on both sides of the ball after offensive coordinator Tony Elliott left to be the head coach at Virginia, and defensive counterpart Brent Venables departed to take the top spot at Oklahoma. The top priority for new OC Brandon Streeter is figuring out the quarterback situation, which figures to be a battle between DJ Uiagalelei and five-star freshman Cade Klubnik. Additionally, while the offensive line could return intact, marked improvement is needed in the trenches. The Tigers could use more consistency at receiver, but the backfield should be a strength with Kobe Pace and Will Shipley returning.

"Clemson’s defense is slated to lose a couple of key cogs, but a unit that limited opponents to just 14.8 points a game in ’21 will be among the best in the nation once again – especially with tackle Bryan Bresee back after suffering an ACL injury in late September."

There are also rankings that have Clemson starting outside the top-10, with ESPN (11) and FOX Sports (12).

"Change is finally coming to Dabo Swinney's dynasty, and the Tigers are undergoing a major overhaul on their coaching staff, after Brent Venables left for Oklahoma and offensive coordinator Tony Elliott was named Virginia's new coach. Swinney stayed in house to replace them, promoting Wes Goodwin to defensive coordinator and Brandon Streeter to offensive playcaller," ESPN's Mark Schlabach wrote. "Quarterback D.J. Uiagalelei threw more interceptions (10) than touchdowns (nine) in his first full season as a starter, and he might be pushed by Klubnik, who is enrolling this month. The Tigers have to play better on the offensive line and need playmakers to emerge at receiver. Streeter might look to get running backs Will Shipley and Kobe Pace and tight ends more involved in the passing game. The defense will get a boost from the return of tackle Bryan Bresee, who missed much of 2021 with a torn ACL."

More in the middle among rankings, 247Sports projects Clemson as just outside the Playoff tier (6), with FOX's Joel Klatt (6), The Athletic ($) in the same range (8) and CBS Sports' Dennis Dodd (9) in the same range.

"Can Swinney maintain national championship-level expectations in Death Valley and get there from the ACC with other programs seemingly gaining on his own? Clemson is one of the more interesting teams for 2022 that will surely be inside most, if not all, preseason top 10 lists," 247Sports' Brad Crawford wrote.