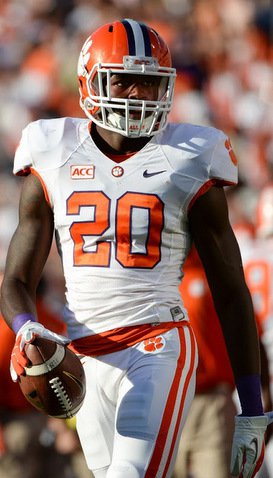 Jayron Kearse is one of several young secondary players

CLEMSON – The Clemson football team finished 2013 with the same record as 2012, but head coach Dabo Swinney

The Tigers finished with an 11-2 record and a win over Ohio St. in the Orange Bowl, a game that saw Clemson’s defense shut down Braxton Miller and seal the win with a late interception. Swinney said it was that kind of defensive improvement that helped his team make strides in 2013, and called the difference “extraordinary.”

“Defensively, very, very proud of what we’ve done. Yes we still have some areas to improve, but you are talking about a team that led the nation in tackles for loss, a team that was second in the nation in three-and-outs defense – that’s pretty tough.”

Swinney said the improvement on the defense started with a deep front seven.

“I know y’all thought I was crazy back in the fall when I said that our front seven was going to be very good,” he said. “Nobody knew anybody’s name, but now everybody knows who Grady Jarrett

Shaq Lawson
Fr. Defensive End
#90 6-4, 260
Central, SC
View Full Profile emerged. Our front seven was impressive and we get most of those guys back. Our secondary improved. It’s still not where we need it to be, but improved greatly. We knew we were going to have to develop some guys at safety and that we were going to take some lumps at safety.

“Everybody can get excited about the future that we have at that position. Those guys are going to get better - Jayron Kearse

Martin Jenkins
RS Jr. Cornerback
#14 5-10, 180
Roswell, GA
View Full Profile back. He played with one arm all year. We got Garry Peters

Garry Peters
RS Jr. Cornerback
#26 6-0, 195
Conyers, GA
View Full Profile back to give us a couple of veterans back at corner and then we redshirted four corners. I like our personnel. It’s going to be exciting.”

“We were still very good offensively, and I knew we would be. We were a little different in some areas. We didn’t have Ellington, so there was a little bit of a transition,” Swinney said. “We didn’t have as deep of a pool at running back as I’d like to because of injuries. Zac Brooks

Zac Brooks
So. Running Back
#24 6-1, 185
Jonesboro, AR
View Full Profile had a hard time staying healthy. D.J. (Howard) got banged up a little here and there. Hot Rod ( Roderick McDowell

Tyshon Dye
Fr. Running Back
#23 6-1, 205
Elberton, GA
View Full Profile – we really felt like he was going to help us, but he got hurt during camp. Jay Jay McCulloughJay Jay McCullough
RS Fr. Tight End
#89 6-3, 230
Fort Mill, SC
View Full Profile really developed. He was guy that wasn’t really ready for the role we wanted him to have, but he really came along. Maybe, y’all didn’t see it, but we’ve seen it. We were still really good offensively and did a lot of good things and played to our strengths.”

However, he wants to see the Tigers become more of a run-oriented team next season.

“I want to see us really run the football. We ran the ball well against Ohio State, who is top 10 in the nation defensively against the run. We ran the ball well against South Carolina,” he said. “We were creative in how we did some things. We have a chance to be pretty special in our backfield. It will be a little bit of a shift in that direction, if you will, but we will see. We are what we are. We do what we do.”

He then said that he thinks the quarterback will have to be a factor running the football.

“I think you will continue to see the quarterback be a big factor for us,” Swinney said. “I just believe that when you’re quarterback isn’t a threat to run the ball, then we are really playing 11 on 10. The quarterback is a great equalizer and really stresses the defense. It puts a lot of pressure on the defense. That element has got to improve from where we’ve been and I think it will.”

Swinney said that Clemson was among the nation’s leaders in a lot of categories, but staying at the top offensively will only happen if the offensive line finds a way to replace Brandon Thomas

“We were top 25 in just about everything. There were only a few teams that finished in the top 25 in scoring offense, scoring defense, total offense, total defense – us and Florida State,” he said. “It’s hard to really be nitpicky, but there are obviously some things that we have to get better at. Offensively, we lose a couple of really good ones on the line. (Isaiah) Battle really emerged.

Joe Gore
RS So. Offensive Tackle
#73 6-4, 275
Lake Waccamaw, NC
View Full Profile , that this is a huge year for them. (Jay) Guillermo, I feel good about him. I feel good about a young (Tyrone) Crowder, Ryan Norton

Ryan Norton
RS So. Offensive Line
#58 6-3, 270
Simpsonville, SC
View Full Profile , Kalon (Davis) and (David) Beasley. We’ve got a lot of good pieces, but we’ve got to sort all of that out. It’s going to be a lot of fun watching them compete.”

The Tigers will also have to find a way to reduce the amount of turnovers in big games.

“If we’re going to get better, we’ve got to cut the turnovers down,” Swinney said. “If you look at the national championship teams and what they had. Honestly, that [turnovers] is what kept us from getting to Pasadena. In our two losses, we had 10 turnovers – against the number one team and the number four team and you don’t even have a chance to win those games when you’re not taking care of the ball. We’ve got to really take another step there. There are a lot of things that go into that and that’s why we practice.”