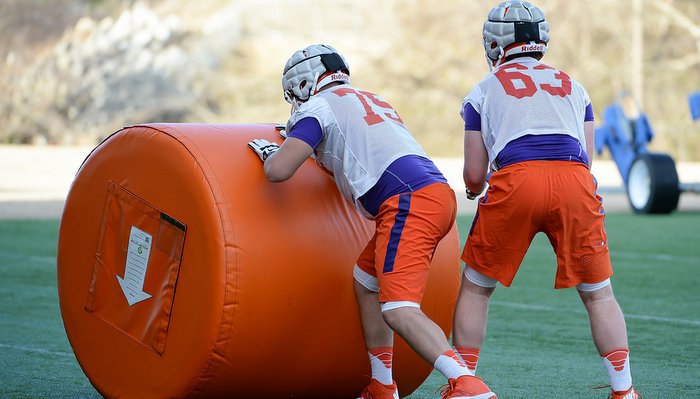 CLEMSON – If you see a strange looking character rolling around Clemson or Central on a moped, give him plenty of room. It might just be Clemson’s head coach.

Football players run the risk of injury every time they take the field, but it seems like you hear about football players and mopeds and accidents more than once during a season and Tiger safety Jadar Johnson

“He had a little moped scuffle. Scuffle with a moped,” Swinney said of Johnson following Monday’s practice. “He should be alright.”

Dabo Swinney
Head Coach
View Full Profile to put a ban on mopeds. Why? Because he likes to ride one himself.

“Never. They (players) have got to handle their business. Wear helmets and be safe,” Swinney said. “Whether you are in a car or moped, riding a bike, or whatever it is be safe. Sometimes there are things that you don't control. I ride a moped but I wear a helmet. I ride all over town. No one knows who I am. I cruise all over the place. I love it. It's fun.”

Quickly getting down to the business of football, Swinney said Monday’s practice ended with competitive sessions.

“It was good. It was a good practice. Tough, really tough couple of days the last week. Today was going back and re-teaching some things. A lot of fundamental time today. It was an all-thud practice but we still had some really good competitive work. We finished up with a competitive third down win or lose drill and then a 4th and 2 on the goal line type of drill. So it was good. Good day. Just trying to get them ready for this big scrimmage on Wednesday.”

Once the scrimmage is concluded Wednesday, the Tigers will have time off before gearing up for the spring game next week.

“Guys will be off Thursday and Friday. Then we will come back and have two more good days next Monday and Wednesday,” Swinney said. “Then Thursday will be our last day in shorts where we split the team and kind of teach them a little bit of skills and drills for the summer. Obviously play the spring game. Once we come back we really got practice structured to kind of let them play a little bit. Full scrimmage on Wednesday and then Monday and Wednesday of next week will be kind of a half and half - half practice and half scrimmage work.

“We just have to keep putting some of these guys in some situations so they can improve. The more we put them in that the better they will be. Then we will button it all up with the spring game and then review everything and give them some really good feedback as they go into the summer. I've said this a couple of times. I really like this team. I really, really like the competitiveness of this team. I like the spirit of this group. I think this is going to be a fun team to coach.”

“He is having his best spring. That's for sure. He had his best season. Now he is kind of following that up. A guy that has been much more focused on being a good player and doing what he has to do to be a good player. He has been great in meetings as far as being very attentive and taking notes and asking questions and his engagement at practice. All those things, but you know he is going into that junior year. He had just enough success last year to know that he could be pretty good, but he had just enough failure that he was inconsistent and he realizes that he didn't quite have the spring that he needed last year or the summer for that matter. I think he is maturing like we hoped he would after this past year. We will keep working with him, but there is no doubt that he can really help us. He shows up. He is working as a return guy as well. All is good with him right now. He is doing a nice job. I haven't got anything on him all spring. Nothing. He goes to class. He is doing everything that he is supposed to do. That's just a real sign of maturity and more commitment.”

“Yeah we have worked really hard on the return game this spring. We will probably do some live return stuff in the spring game this year as a matter of fact. Really pleased with what I have seen out T.J. (Green), (Wayne) Gallman, Artavis (Scott) and some of those other guys that we put on the back in kickoff return. Germone and Tay and Ryan Carter

Ryan Carter
RS So. Cornerback
#31 5-9, 180
Grayson, GA
View Full Profile , (Hunter) Renfrow - those are all the guys that have been working at the punt return spot and doing a nice job.”

“Great improvement. Just tremendous improvement. Big, big step from where he was this time last year. Just night and day. We are very encouraged with him. He is going into his redshirt sophomore year. He is where we hoped he would be and where we need him to be. He's a good football player. We have four seniors in that starting group and him. He is the only sophomore. He has, I think, really grown up a ton. His body is in good shape. He has really done a nice job of buying into the conditioning part of what we need. He is obviously very strong. He is just much more knowledgeable and confident because of that.”

“We had a big personnel meeting this morning and I was just really, really excited about our offensive line. Just pleased and excited as I have been since I have been at Clemson, 12 years. They got the right makeup. We got that first group, like I said a week or so ago, the chemistry, the want to, the desire, the toughness, the knowledge. That's a group right now that's really doing a nice job for us. Then you flip behind it and it’s (Justin) Falcinelli and (Taylor) Hearn and those four freshmen that just got here. They are not all ready to be great players today, but they are going to be because they want to be. It’s important to them and they are passionate about it. You don’t have to worry about it because you know that they are doing everything that they can to improve. We have a whole room full of guys that are committed to being great offensive linemen and know what it takes to do that.

“That veteran group is out front, but Mitch Hyatt

Mitch Hyatt
Fr. Offensive Line
#75 6-6, 270
Sugar Hill, GA
View Full Profile is very, very close to that group. He just kind of has to put it all together this summer. I think (Jake) Fruhmorgen is really coming as well. Noah (Green), man he has all the tools. Tough. He’s still putting it all together. And Zach Giella

Zach Giella
Fr. Offensive Line
#77 6-5, 275
Augusta, GA
View Full Profile – it’s probably been a bigger transition for him, but it should be coming from a smaller school. He’s got all the tools and he’s working some center and some guard as well.”