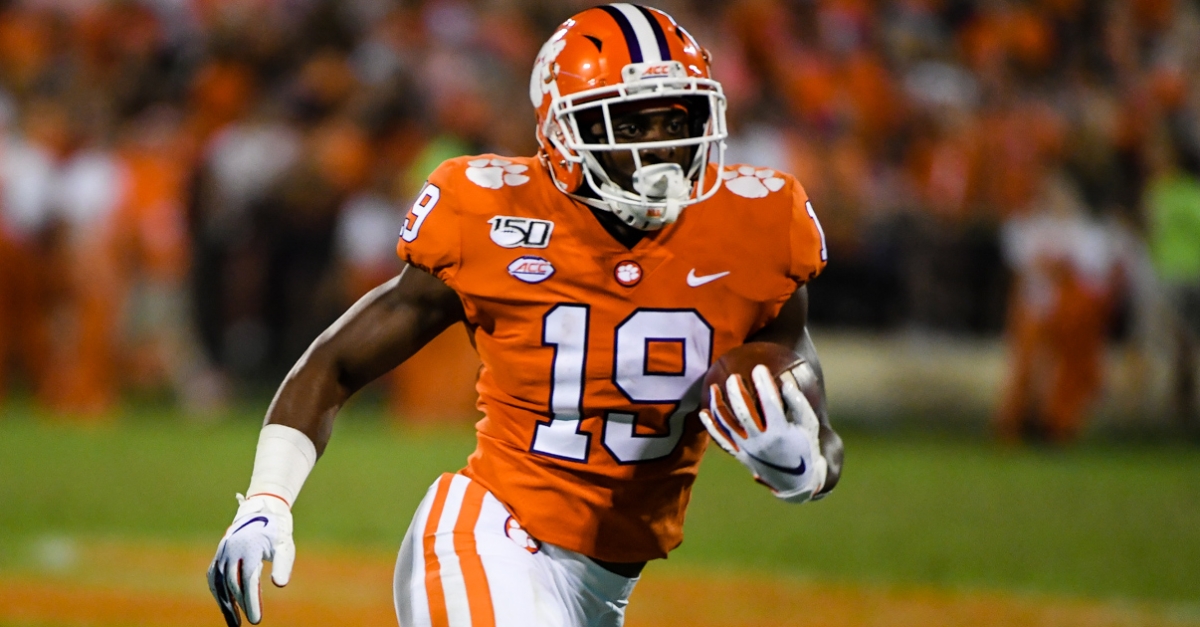 Dukes is one of the players in line for more playing time.

Clemson brings back arguably the best running back in the country and might just have the best depth of any team in college football.

How much work will Travis Etienne get this spring?

Etienne shocked the country when he announced he would return for his senior season. He will team with quarterback Trevor Lawrence to give Clemson one of the best offenses in the country. And as good as he is – I think he’s the best back in the country – he’s got a chance to be even better in 2020.

Head coach Dabo Swinney said that while Etienne finishes his degree and continues to push for the NFL, the Tigers and the fans get to watch another year of the best running back in college football.

“I think he’s the best back in the country. Period. But obviously I’m pretty biased when it comes to that,” Swinney said. “But he’s got a great future ahead of him and I’m excited about the fact that he’s back. He’ll be a great leader. He’s been awesome already. I think he’s got a chance for this to really, really pay off for him. It’s nice to know he’s back.

“I’d already given his No. 9 away. I had about 10 people who wanted his No. 9. These old boys are vultures around here with numbers. So, I had a line of guys that wanted nine, and I was like, 'Yeah not so fast. You will have to find another number.'”

The big question is how much work will Etienne get this spring with running backs coach Tony Elliott wanting to see the younger players in action?

Will Lyn-J Dixon hold off the others and to the second spot on the depth chart?

Dixon is really, really good. He enters 2020 with 1,182 rushing yards and 11 touchdowns on 166 career attempts and 162 yards on 15 catches in 389 career snaps over 28 games. He enters his junior season ranked second in school history in yards per carry (7.12) behind only teammate Travis Etienne.

However, Mikey Dukes and Chez Mellusi are chomping at the bit for playing time, and veteran Darien Rencher deserves his shot, as well. Demarkcus Bowman and Kobe Pryor will walk on campus in June and there are some that think Bowman will earn early playing time. Dixon needs to take another step forward in his development if he wants to hold off the wolves.

Which one will challenge for more carries, Dukes or Mellusi?

Mellusi enters 2020 with 276 rushing yards and three touchdowns on 44 carries in 81 career snaps over 11 games. He had his moments during his freshman season – Mellusi rushed six times for 36 yards in his collegiate debut against Georgia Tech and recorded a 57-yard touchdown run on his lone carry at Syracuse. He rushed six times for 30 yards against Charlotte and gained 22 yards on five carries at home against Florida State. He gained 57 yards on eight carries vs. Wofford and then had seven yards and a touchdown on three carries vs. No. 22 Virginia in the ACC Championship Game.

One of these players might separate from the pack a little bit in the spring. Both showed flashes in fall camp and during games. Mellusi showed the ability to bang between the tackles AND hit the home run with his long run against Syracuse. This will be one of the more intriguing battles to watch this spring, because the running backs room gets even more crowded in June.