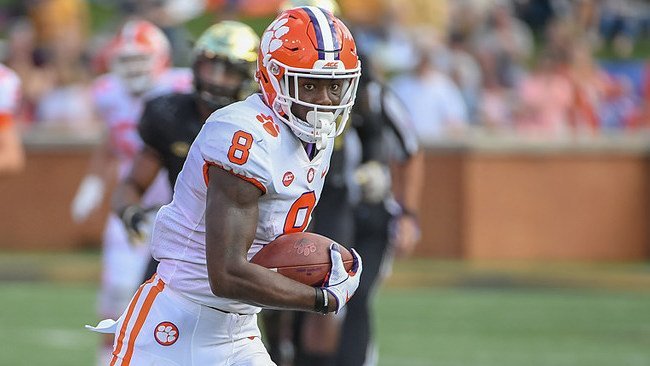 CLEMSON – Justyn Ross is six games into his Clemson career and it’s everything he hoped it would be and more.

The Alabama native spent time this week reflecting on his four months at Clemson and the impact he has had on the Tigers’ explosive offense. Part of that reflection included taking a look at the recruiting process - after being recruited by his home state schools Auburn and Alabama, Ross committed to Clemson, Wide Receiver U, and the Clemson family.

“It was a great recruitment process. I took it really slow because my mom wasn’t here, she was deployed overseas,” Ross said. “When she got back we kind of hopped right to it and went around. It was a great process and I’m very glad I picked Clemson. WRU had a part in it. As a receiver, everyone that goes here goes to the NFL. I see it happening and I feel like I can be one of those guys, but it was more than WRU. It was kinda the environment and the family-type coaching they have here.”

Ross is one of the many freshmen making waves for the Tigers, including Trevor Lawrence, Lyn-J Dixon, and Xavier Thomas. His immediate impact for the Tigers came as a surprise for the 18-year old and some of his underclassmen teammates.

“I mean, me and Lyn-J (Dixon) talk about it all the time. We are kind of still surprised, don’t even think I've realized how much of an impact we are making. It’s a Top 5 team and we are freshmen, we just got here this summer,” Ross said. “I wasn’t worried that much about playing time when I first got here because I knew I had a lot to develop on and get ready for, but I kind of developed faster than I thought I would. It’s great, I love it here. I love winning.”

As of this past week’s win over Wake Forest, Ross’s total receiving yards total up to 286 and four touchdowns. Ross’s downfield blocking ability has also made him a stand out on this elite Clemson offense.

“He’s points. He scores a lot of touchdowns. It seems like every time he catches it, it’s a big one,” Swinney said. “He’s just another weapon. Obviously, we’ve got some really good players, especially at that 9-man position with Tee (Higgins), Diondre (Overton) and Justyn. He’s a big, strong, physical receiver.

“The other thing is what he does without the ball, too. That’s what excites me. He is a physical blocker and is a very polished route-runner for a guy that is a freshman. So, just gives us another weapon, and there’s no question he’s on his way to having a great second half and definitely a guy that we want to continue to have involved.”

Sophomore Tee Higgins has seemed to leave a lasting impression on the freshman. Ross was quick to compare similarities between the two, and the bond they had created.

“Me and Tee, I look at Tee as like an older brother. He’s kind of paving a way for me, leading the way for me. Yeah, we are, we are very similar,” Ross said. “Big receivers, long, fast, can run, physical, we can do a lot of things the same.”

Higgins and Ross both seem to take pride in the puzzling combination the pair bring to the opponent’s defensive backs.

“I don’t know, they are puzzled,” Ross said. “They don’t know who to get and which one to guard.”