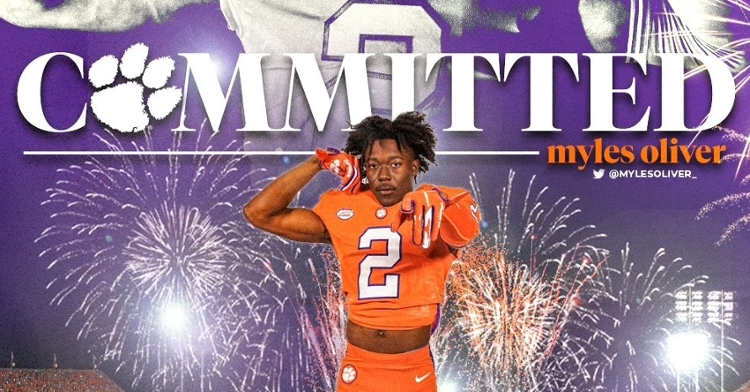 Oliver committed to Clemson this past weekend.

A snowy trip to Clemson turned into a commitment for a 2022 cornerback.

Myles Oliver is a 3-star cornerback out of Douglasville (GA) Douglas County who only recently received his first Power 5 offer, and that was from Georgia Tech. His other offer, prior to being offered last week by Clemson, was from Charleston Southern.

Cornerbacks coach Mike Reed invited Oliver in for a visit, and Oliver liked what he saw out of the Tigers and pledged to head coach Dabo Swinney.

“The visit was good. When we first got in, we ate dinner. Then on the second day, we had to pack everything in because of the storm,” Oliver told TigerNet. “We had to go around the campus, put on the gear and all of that type of stuff.”

It was Reed, however, who made the most impact.

“I spent the most time with Coach Reed. We've been talking for about a month,” Oliver said. “We talked about how I was a good student, an offer and stuff like that. He likes how long and athletic I am.”

What made him decide to go ahead and pull the trigger on a commitment?

Oliver made the call to the Tigers’ head coach once he made his decision.

“I called Coach Swinney and when I told him, he was very happy,” Oliver said. “He told the whole staff that I committed as soon as I did it. He was like, 'Oh my gosh, committed? Boys, we got him!' They're very excited that I committed.”

Oliver earned 6A All-State honors as a defensive back as a senior, where he tallied 75 tackles and five interceptions (one returned for TD), as well as 552 all-purpose yards and four total scores.