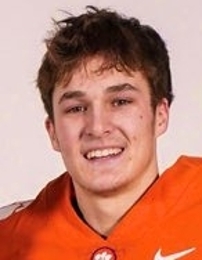 Wide Receiver
B I O
Named first-team All-South Metro as an athlete after recording 42 catches for 581 yards and seven touchdowns in addition to accounting for touchdowns via punt return and kickoff return … averaged 19.5 yards per punt return and 34.5 yards per kickoff return, finishing the season with 1,160 all-purpose yards … second-team all-state … coached by Buddy Anderson and Sean Calhoun at Vestavia Hills High School … initially focused on basketball before playing his first season of high school football as a junior … committed to Clemson on Jan. 16, 2022 … plans to enroll in the summer of 2022 … his late father, Kevin, played football with Dabo Swinney at Alabama … Kevin went on to play eight years in the NFL with New England and Philadelphia … his brother, Nolan, was a 2020 All-America safety who played 65 career games and earned two degrees at Clemson from 2016-21 … born April 11, 2003.