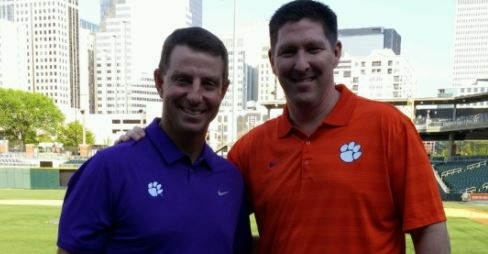 Clemson made the Sweet 16 in the 2017-18 season and won a play-in game in Brownell's first year. (NCAA Tournament photo)

Clemson men's basketball wrapped its season over the weekend in the first round of the NCAA Tournament with a loss to 10-seed Rutgers, 60-56.

It was the third NCAA Tournament appearance for the Tigers under coach Brad Brownell, who has been with the program since the 2010-11 season.

Clemson coach Dabo Swinney is often spotted at Clemson basketball games and he offered his analysis unprompted on the ups and downs of the campaign after practice on Monday:

"I’m proud of our basketball team. I really am," Swinney said. "Certainly hated that we got beat in the opener. Man, let me tell you something -- to be a 7-seed and have the type of season that we had. The most challenging year ever and some of the best basketball programs in the history of basketball aren’t even in the tournament but yet Clemson is. Yeah, I’m disappointed we got beat but they competed their tails off. I’m super proud of those seniors. I really am. Those guys have made us better.

"It’s great to get back in the tournament and hopefully getting a taste of that for these young, talented guys we’ve got will be something that Brad and those guys can really use to continue to grow them, get them better and get them back."