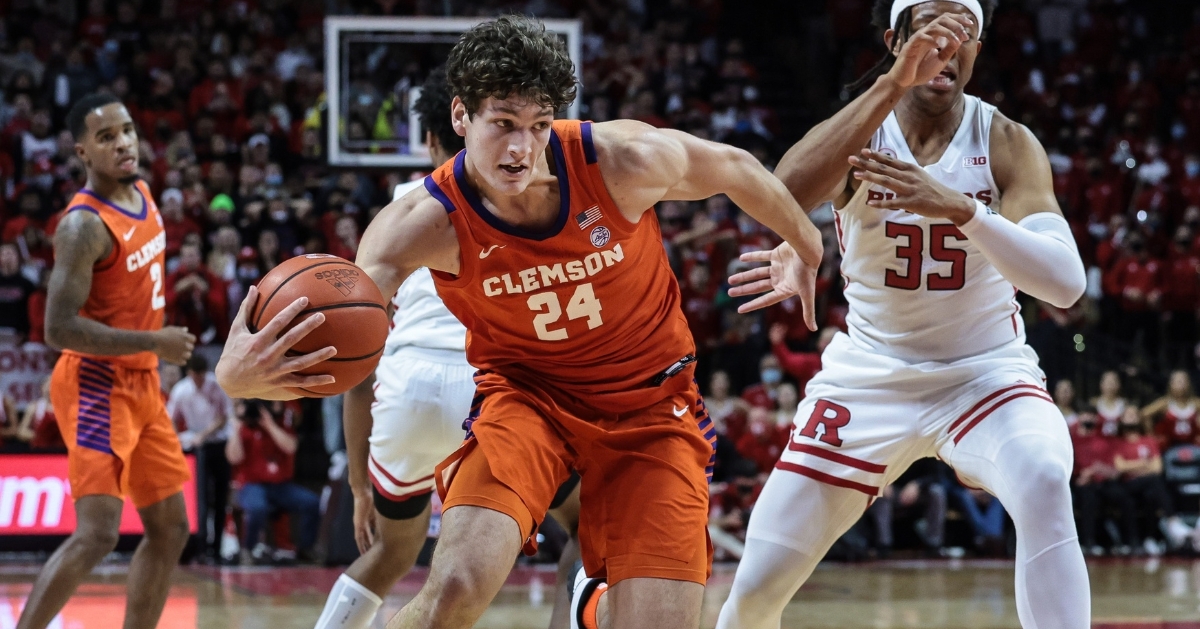 Hall picked up his fourth foul under two minutes into the second half and fouled out with four to go, scoring 10. (Photo: Vincent Carchietta / USATODAY)

The Rutgers Scarlet Knights men’s basketball team held the homecourt and largely controlled the action to top Clemson for the second time this calendar year, 74-64.

The Scarlet Knights jumped out of the gates with a 6-0 lead that Clemson would close down to tie up just over four minutes in.

After the teams largely traded baskets, Rutgers went on a 9-1 run to close the half -- shots from beyond the arc the difference -- for a 33-25 edge at the break. They hit five total 3-pointers, while the Tigers sunk just one of their nine attempts and shot 33% overall in the first 20 minutes.

Clemson’s leading scorer on the season, sophomore forward PJ Hall, picked up his third and fourth fouls just over a 1 1/2 minutes into the second half as Rutgers extended its lead to double-digits. He had four points at the time and finished with 10 points and four rebounds.

Tigers guard David Collins broke a 10-shot team drought from the perimeter to cut the lead back to five and New Jersey product Al-Amir Dawes hit back-to-back buckets to bring the deficit down to three with 13 minutes left in the game. Chase Hunter then went coast-to-coast for a layup, but after an offensive rebound, Rutgers’ Ron Harper Jr. hit a trey to get his team back to a four-point advantage and built on the lead from there in the following minutes. Harper finished with a season-high 23 points.

When Hall returned to the court, he made an impact with a pair of buckets to cut the Rutgers lead back to five with seven minutes left. Harper’s hoop-and-harm with just over four minutes left sent Hall to the bench, however, and extended the Scarlet Knights’ lead to seven.

A big Clifford Omoruyi dunk on an alley-oop from Harper pushed the lead out to eight points with just over 2 1/2 minutes left and a turnover from Collins the next possession essentially salted the game away.

"We just didn't play well enough today," Brownell said postgame. "I thought we would play better. We practiced really well. We played exceptionally well in our last game. I thought we had great momentum coming in. But we didn't have many guys play very well tonight.

"Details matter and we've had to fight this team on a few things on both ends with details. It's cost us. I thought we competed really hard and had to go with a really small lineup in the second half to just try to speed up the game and try to make them adjust to us and play faster. PJ (Hall) was struggling tonight and didn't play very well. So that worked and got us back in the game a couple of times but we just weren't good enough to finish it off."

"All in all we just didn't play well enough," said Brownell. "Offensively, I was disappointed in how we moved the ball, especially in the first half. I thought we had some selfish play and some bad shots and we couldn't quite get it rectified in the game today."

Clemson opens up ACC play next at the Miami Hurricanes on Saturday (noon/ACCN).

Clemson-Rutgers box
Get the latest Clemson gear right here!
Comment on this story