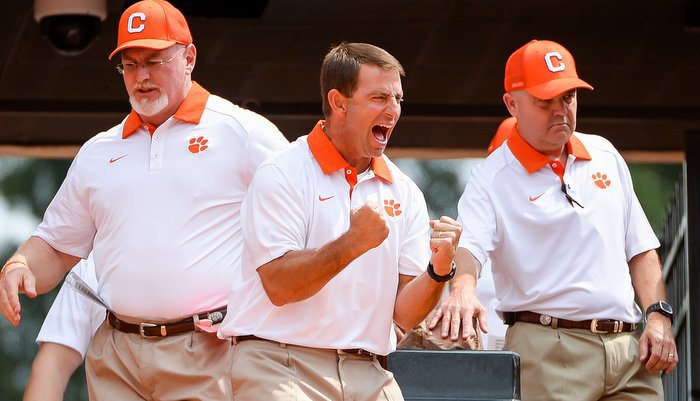 We live in great times if you are a fan of Clemson football. Dabo Swinney has the program healthier than at any point in my lifetime. The Tigers are in the middle of a five-year run that has seen the program go 48-11 overall and 30-6 in the ACC. The Tigers have ended seasons ranked 22nd, ninth, seventh and 15th the last four seasons and are ranked sixth this week.

But how long will this window of opportunity be open?

My initial reaction is that I can see it staying open for an extended amount of time. As long as Dabo Swinney is the head coach and the recruiting stays at a high level, the program should continue to be great and maybe even climb to the elite status.

South Carolina had a three- or four-year window under Steve Spurrier, but that window closed the last two years. Since we don't know who the new coach will be, it is difficult to tell when the window will open up again. The reason it was open to begin with was the signing of great players like Marcus Lattimore, Jadaveon Clowney, Alshon Jeffrey and Melvin Ingram. The Gamecocks failed to replace those stars and are 10-10 in their last 20 games.

For other schools, the window appears to stay open longer and even when it closes, it opens back up sooner. In the past two years, we have seen or will see new coaches at powers like Nebraska, Penn State, Texas, Michigan and Southern Cal. It is easier to open those windows at traditional powers, but even with built-in advantages, the windows can close.

It can also close fast. Is Oregon done? Auburn?

Georgia is an example of a school that has had years of open opportunities. However, the Dawgs seldom take advantage. Alabama is in the midst of a long run with this window for greatness. The Crimson Tide don't win the national title, SEC or even SEC West every year, but they seemingly have always been in the picture under Nick Saban.

Clemson has done a great job replacing the stars. When Tajh Boyd's days were done, Deshaun Watson was ready to make his mark. C.J. Spiller paved the way for Nuk Hopkins who left it to Sammy Watkins who left it to Artavis Scott and Mike Williams.

Clemson lost eight starters on defense this season but is a top ten defense this year because of recruiting. Shaq Lawson, Kevin Dodd, Carlos Watkins, Scott Pagano and Christian Wilkins are not a big drop off from last year's dominant defensive line.

Stephone Anthony and Tony Steward left it for BJ Goodson and Ben Boulware, who will leave it for Tre Lamar and maybe Shaq Smith.

This team currently has four senior starters out of the 24 which includes the place-kicker and punter. The two-deep is even better with only six of the top 45 being seniors. They have as many freshman starters as they do seniors. So the window shouldn't close anytime soon.

What we are seeing is the greatest time in Clemson football history. Clemson's staff is elite. The facilities continue to improve. The game-day atmosphere is as good as any place in America. The talent level continues to improve.

At this point, I would be more surprised to see the window close than I would if it stayed open an extended period. Happy times may be here for a while.