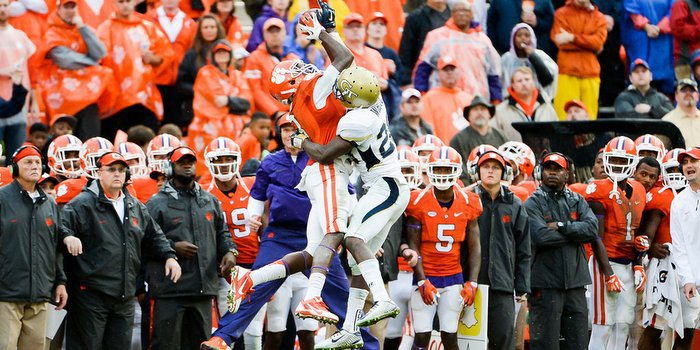 Perfection is not obtainable in this sport, but Saturday was complete domination. It was not a perfect game, and that's a good thing. The staff still has some things they can coach and correct today when meeting with the players.

I think we learned a lot about each of these teams this year and both of these programs.

The 43-24 win over Georgia Tech improved the Tigers' record to 5-0 and moved Clemson into the top five in the country. Meanwhile, the Jackets dropped their fourth consecutive game and are now 2-4. Tech's two wins this year have come against Alcorn State and Tulane.

Sure Georgia Tech was hit hard by graduation, but so was Clemson. Sure Tech has had injuries, but so has Clemson. What this one looked like was a team full of four and five stars against a team of two and three stars. One program looks elite or close to elite while the other looks lost. Much has been made of Paul Johnson and yes, he has had success against Clemson, but the Tigers have won three of the last four in the series. My guess is if Deshaun Watson

Deshaun Watson
So. Quarterback
#4 6-2, 207
Gainesville, GA
View Full Profile had not gotten hurt last year, it would be four in a row.

Saturday Clemson held the Yellow Jackets to 71 yards rushing. Tech was just 1-12 on third downs. The Jackets had just 12 first downs. The Tigers had 11 tackles for a loss. The Tigers forced eight Georgia Tech punts.

Offensively it was almost as good. The Tigers outgained Tech 538-230. They doubled the Jackets first downs 24-12. Who would have thought Clemson would outrush Tech 202-71?

Like last week, Clemson started fast. This time, the opponent was inferior, and the Tigers keep their foot on the gas. The offense had ten plays of 16 yards or more.

On the first series, Wayne Gallman

Wayne Gallman
RS So. Running Back
#9 6-1, 210
Loganville, GA
View Full Profile went 66 yards on the third play of the game. It was another great effort by the offensive line that helped give Gallman another 100-yard effort. Zac Brooks

One difference from last week was the passing game. Watson was on early, and the Tigers exploited the advantages in athleticism. Watson went 23 of 33 for 336 yards with two touchdowns.

It was not a perfect game. Mistakes were made. The defense sold out to stop the run and, as a result, a couple of blown coverages occurred. The Tigers did commit three turnovers as well.

But Clemson was the dominant team. There was a big talent difference all over the field, especially along the line of scrimmage. Perhaps this was the most dominant performance in the series in quite some time. My guess is the way Clemson and Tech are recruiting; this series may continue to go down this path.

The dominance was impressive considering the Tigers were coming off of a huge win over Notre Dame last week but give Clemson credit. This team was ready to play.

The fans also deserve a lot of credit as well. It was another rainy day in Clemson, but the fans were awesome once again.

The fifth win of the year was the most impressive for the Tigers. Like last week, this is one to remember.