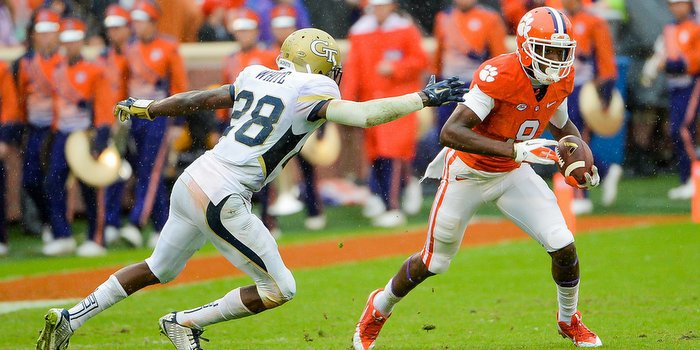 Football seasons are long, and this season we have seen major injuries across the country become a major storyline in college football.

As injuries become a bigger factor, depth becomes a key. One of the reasons I am extremely encouraged about this team and this program is the depth that has been built through recruiting and player development. We saw more depth emerge this past Saturday in the win against Georgia Tech.

Here are five players that played well Saturday and continue to add depth to this Clemson team:

Deon Cain
Fr. Wide Receiver
#8 6-1, 197
Tampa, FL
View Full Profile is coming on at wide receiver. He is a converted quarterback, but this former five-star athlete is learning the position and continues to be a bigger part of the offense each week. This past week he shined with five catches for 97 yards, including his most spectacular reception yet. We love his long term upside, but is he the answer quicker than we thought?

Hunter Renfrow
RS Fr. Wide Receiver
#13 5-10, 176
Myrtle Beach, SC
View Full Profile is a former walk-on that had little to zero expectations compared to Cain, but the freshman has made a big impact so far early in his career. The sure-handed Renfrow has been perhaps the biggest surprise in the program this season. When the depth chart came out this week, Renfrow was listed as a starter and he has certainly earned that opportunity.

Zac Brooks
Running Back (2012 - 2015)
#24 6-0, 200
Jonesboro, AR
View Full Profile missed the entire season last year with an injury and was banged up to start fall practice this season. He was lost in the shuffle on the depth chart, but Brooks has started to separate from the pack for the role of Wayne Gallman

Mitch Hyatt
Fr. Offensive Line
#75 6-6, 285
Sugar Hill, GA
View Full Profile , but Fruhmorgen is another rare talent that has seen significant snaps at offensive tackle as a first-year player. This past Saturday Fruhmorgen played his most significant role and his snap totals continue to increase.

Dorian O'Daniel
RS So. Linebacker
#6 6-2, 219
Olney, MD
View Full Profile made a big impact at the SAM linebacker this past weekend. Travis Blanks

Travis Blanks
Safety (2012 - 2015)
#11 6-0, 211
Tallahassee, FL
View Full Profile has better cover skills, but against the option attack of Georgia Tech, O'Daniel was a big-play defender. Look for his role to increase against the running attack of Boston College.