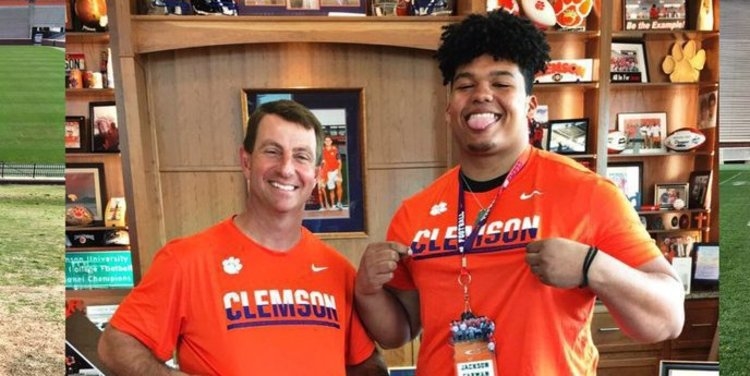 Carman picked Clemson out of a final three also including Southern Cal and Ohio State.

Clemson just shocked the recruiting world by adding another talented 5-star player to their roster.

"As the time of my recruitment comes to a resolution, it thus marks the exposition of a new chapter of my life," Carman tweeted. "I'd like to thank my coaches at Fairfield High School, as they aided in guiding me to the place I am today. I'd like to thank my parents for the gift of life, and the teachings they've imparted to me throughout my upbringing within my households. Also, I would like to thank every school that has ever offered, recruited, or reached out to me, & that I cherish the opportunities that were presented to me by each of them respectively. Without further ado, I will be committing to Clemson University!"

An "Opening" competitor this past July, Carman recently made an official visit to Clemson.

Brings to Clemson: The frame almost says it all when it comes to the potential for the No. 1 offensive tackle in this class. The film shows a man among boys in the high school ranks, with Carman easily dispatching defenders coming for the QB. Carman counts intelligence on the field as one of his strengths, in addition to athleticism and drive.

Depth chart fit: Carman will have to put in the work as an early-enrollee to move up the two-deep, but that's certainly an advantage similar to former five-star Mitch Hyatt's recruitment in picking up the offense. Hyatt's upcoming NFL decision will play a role as well in early snaps.

Spent time with @Jackthejiant at The Opening in Oregon and at a game in September. Unbelievable pickup for the Tigers, but Clemson fans are going to enjoy getting to know the person as well as the player