Clemson coach Dabo Swinney was able to be a father for a few moments on Saturday as he watched his son Will score on an 8-yarder in the fourth quarter against Louisville. It was his first career touchdown.

Dabo was all smiles on the sidelines watching his son get the final touchdown of the game.

Will Swinney was the 11th Clemson player to score a touchdown against the Cardinals. 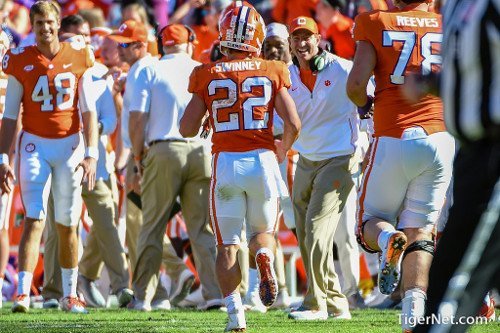 Will Swinney is in for the TD!

Dabo Swinney's son Will scored his first career TD for Clemson as the Tigers go up 77-16. pic.twitter.com/A3kPsbfqtM

Coach Swinney ??"Onto BC". #ALLIN ?? pic.twitter.com/mCXWvnsQD1

"It was pretty special. ... He’s a grinder and I know mama Swinney’s gonna be happy tonight!"

–Dabo Swinney on his son scoring his first @ClemsonFB touchdown