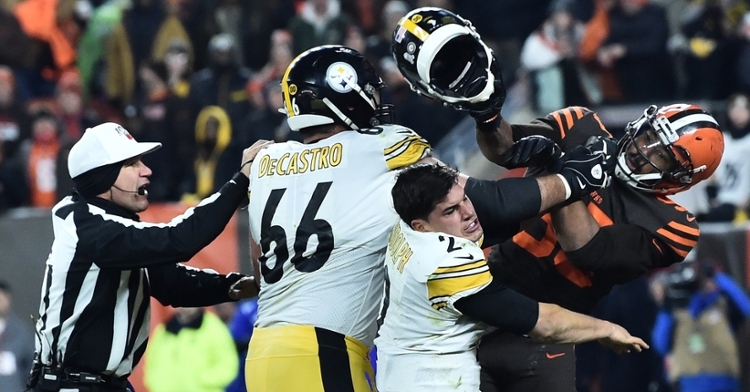 The Cleveland Browns (4-6) came away with a 21-7 victory over the Pittsburgh Steelers (5-5) on Thursday night.

However, much of the talk moving forward will be about the brawl that took place in the final minutes of the ballgame.

Browns' defensive end Myles Garrett ripped off the helmet of Steelers' quarterback Mason Rudolph and smacked him in the head with it. After that, Pittsburgh offensive lineman Maurkice Pouncy was seen punching and kicking Garrett.

"I know it’s bush league, and I know it’s a total coward move on his part," Rudolph said in the post-game press conference. "I'm not going to back down from any bully."

The two teams will battle again on December 1.

??If you just woke up and are wondering why Myles Garrett and Mason Rudolph are trending. #PITvsCLE

“I know it’s bush league, and I know it’s a total coward move on his part.”

Myles Garrett says his actions that led to the fight between the Steelers and Browns were "foolish." pic.twitter.com/nfOEf6g3Zn

"Mason Rudolph, the Pittsburgh Steelers could files charges against Myles Garrett for what we now have seen is the closest thing to on-field criminal activity. That was assault last night."