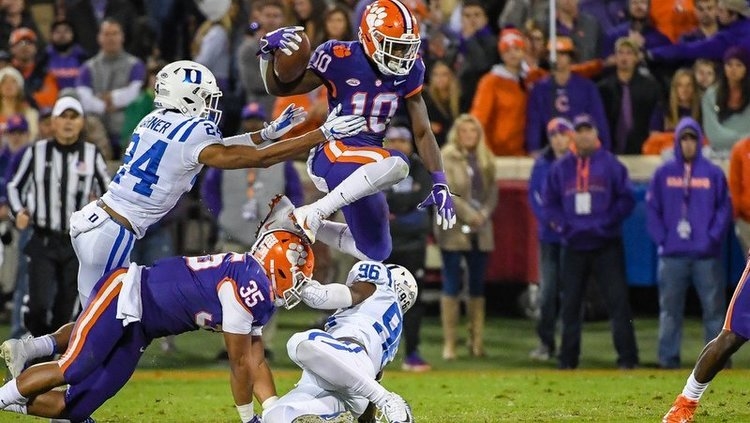 Does Clemson have a rare player that can excel at offense and defense?

It appears the answer is a resounding YES.

Clemson defensive coordinator Brent Venables spoke with the media Wednesday night and shared that receiver Derion Kendrick would be a starter at cornerback if the regular season started today.

"I'm excited about him," Venables said. "He will play defense and probably return (kicks). He has had an excellent spring and obviously, he wasn't there the whole time but when that decision was made, he has taken off. He is very natural. He has got great extincts, very tough, competitive, and incredible transitional movement when he knows what he is doing."

Venables knows that Kendrick will get better and better as he fine tunes and learns the details of the playbook.

"He is not far off, just not real hard for the real good ones," he said. I wouldn't necessarily call him a great player yet at that position, he is still learning a lot of the nuances and intricacies of what we do but it comes very easy to him. If you said name the starters today and you're picking two, he's one of the two starters today. I am not the head coach, but if you're asking my vote, we will take him. He will play a lot and be a big part of what we do. That is not an indictment on the other guys. He played defensive back in high school and has a natural football IQ, and he is a very confident guy, and it shows in how he plays. He is a quick learner and very coachable. It was an easy transition because he is coachable and will take a butt-chewing and he responds. I am really excited about him."

As a freshman receiver, Kendrick had 15 receptions for 210 yards last season.

Running back Lyn-J Dixon talked about his improvement from last season, the mentorship with Tavien Feaster, and some of his football idols:

Some pictures from Clemson practice:

Final spring ball practice before we head to The Valley on Saturday ?? #ALLIN pic.twitter.com/89NkYIkvYg