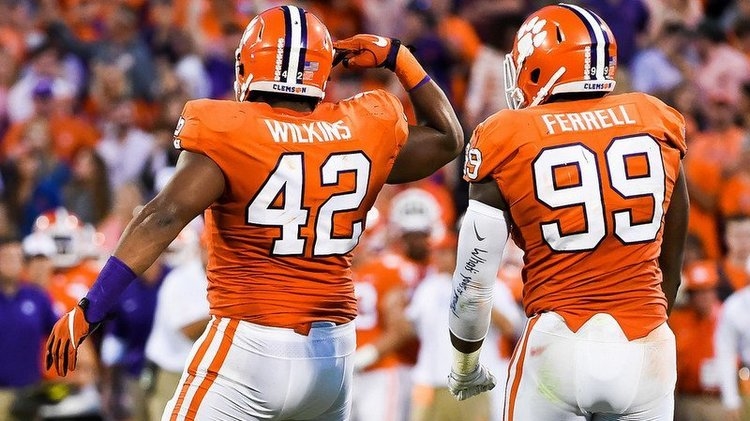 The 2019 NFL Draft is less than two weeks away with it starting up Thursday, April 25 through Saturday, April 27.

NFL.com's Adam Rank released his latest Mock Draft recently and two Clemson defenders were on the list with Christian Wilkins and Clelin Ferrell.

Wilkins was projected to the Atlanta Falcons with pick No. 14 overall.

"As I did with the Bucs, I'd also like to ask you to not address your offensive concerns," Rank said. "But again, this comes from a place of selfishness related to my fantasy team. But this would be a great spot for you to land a guy like Wilkins, who is No. 7 overall in Daniel Jeremiah's ranking of the draft's top 50 prospects. That's huge. And the Falcons could use help up front on defense."

Ferrell was predicted to slide down to the Oakland Raiders at selection No. 24 overall.

"Don't be bummed because you missed out on Jacobs," Rank said. "Isaiah Crowell is going to be really good for you. So let's once again focus on the defense. You got Quinnen Williams earlier in the draft, and he's also going to do great things for you. Now we're going to add Ferrell off the edge. He won't make you forget about Khalil Mack, but you're going to have a nice duo to build around on the defense."

Dexter Lawrence and Trayvon Mullen were not included in the NFL.com mock draft.