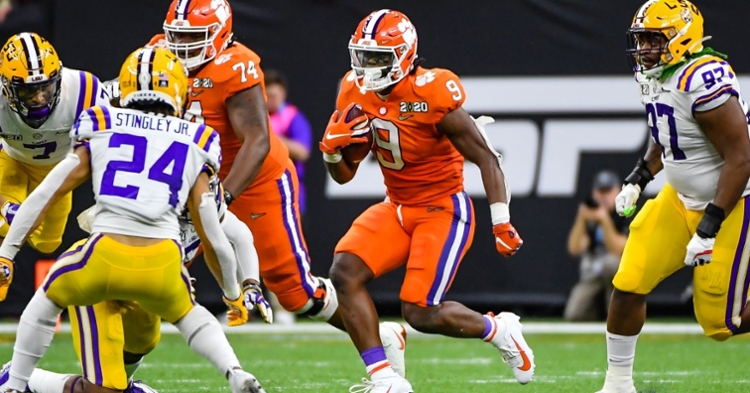 Junior running back Travis Etienne has unfinished business at Clemson so he announced Friday that he was returning for his senior season to get his degree and try to go out on top next season.

Some National media pundits couldn't believe that he would stay in school while Clemson fans were obviously very happy with the news of their good fortune.

Check out some of the highlights on Twitter below:

Why do people give a crap whether Travis Etienne comes back to school or not. Isn’t it his choice?

I don’t understand the decisions of Najee Harris and Travis Etienne to return to school. Makes no sense at RB

"It's a testament to our culture and our environment. ...He values his education. He understands football is temporary but his education will always be there.”#ALLIN ???? pic.twitter.com/ioXMRiLgtw

Travis Etienne is coming back!?

It cracks me up how many people/media members have questioned/criticized Travis Etienne for deciding to STAY...

It’s as simple as this... Right now, at best, he’s the 4th RB in the Draft. Next year, he’s potentially going to be the 1st RB.

It’s not that difficult to understand.

Great day to be a Clemson golf and football fan. Ben Martin fires 8 under at PGA Tour event to go from 124th to 26th. Travis Etienne and his 8 yards per carry returning for senior year on the gridiron

Travis Etienne when he announced he was returning to Clemson: pic.twitter.com/Cq1pXymeDe

Clemson fans rejoice! You’ll be getting to see more of #9 next year as Travis Etienne says he will return for his senior season. pic.twitter.com/lw0JxFLtLH

Some serious returning RB talent in college football next year

and on and on

For anyone to imply that Travis Etienne hasn’t considered the risk of retuning for his senior year also implies that his family and his coaches and teammates haven’t either. Those people need to just go away. The man is smart enough to make his own decision.

Clemson junior Travis Etienne announced he will return for his senior season.

In 2019, there was only one player returning that had 2,000+ yards from scrimmage the year before (Taylor).

So Clemson is going to bring Trevor Lawrence, Travis Etienne, Justyn Ross and all the motivational fuel Dabo could ask for into next season. That's a rather scary combination.

When you find out Travis Etienne is coming back to Clemson... #ALLIN pic.twitter.com/96vck0L6Uf

?? take: Travis Etienne’s decision to return to Clemson to get his degree, potentially win a Heisman and leave as a national champion isn’t “a bad business decision.”

Get out of here with that garbage.

Travis Etienne, 6th on the ACC’s all-time rushing list, is on pace to break the current record held by NC State’s Ted Brown by over 1,000 yards next year if he can keep pace with the 1,636 yards he has averaged over his past two seasons as Clemson’s feature back. Legend. pic.twitter.com/HPy7eMuouo

Already had Clemson No. 1 in my too-early Top 25 for 2020. All the mores now that Travis Etienne is staying in school https://t.co/AzOPKu5spq https://t.co/AeGDNcQ8DM

Let's see... Travis Etienne, Trevor Lawrence, Amari Rodgers, Braden Galloway, Justyn Ross and a bevy of other playmakers. Next year will be fun to watch.

#Clemson RB Travis Etienne going back is certainly a surprise.

He wasn't a lock top-50 draft pick and maybe that factored into his decision. A chance to grow as a receiver/blocker and better inside runner. And he seems to really enjoy his college experience, which is awesome.