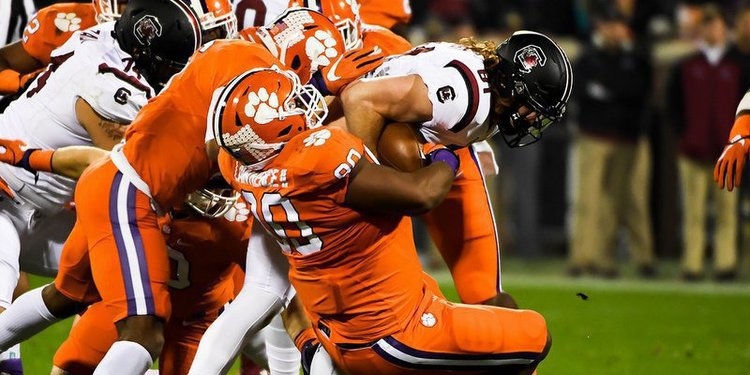 Defensive tackle Dexter Lawrence was rated No. 7 overall (previously 7), grade of 93, and the No. 3 rated DT behind only Houston's Ed Oliver (2) and Alabama's Quinnen Williams (6).

"Lawrence has remarkable agility and athleticism for his size, giving him great range for a run defender," McShay said. "He needs to be better about pad level, but single blockers can't move him at all. His power is overwhelming, and he looks more fluid this season after dealing with injury in 2017. He has recorded just five TFL, but there's a lot of talent here, and he is playing with one of the best lines in the country."

Lawrence has recorded 29 tackles including 5 tackles for loss and three pass break-ups in 2018.

Defensive end Clelin Ferrell was chosen No. 11 overall (previously 12) and third highest-rated DE with a grade of 91.

"Ferrell has very good, if not elite, physical tools. He grades out as an every-down NFL starter, though he could be used as a 3-4 outside linebacker or a 4-3 defensive end," he said. "His hands aren't overly violent at the line, but they are quick and active. Through 11 games, his quick first step has helped him to 16 TFL and 10.5 sacks (fifth in the nation)."

"At his best in a 3-technique role, Wilkins is scheme-versatile and has experience playing inside and outside -- and he wreaks havoc either way," he said. "He has great foot speed, and when he doesn't get home, he gets his hands in passing lanes. He brings a high motor and excellent awareness to a talented Clemson defensive line. Well-liked and a leader in the locker room, Wilkins projects as a three-down starter. With Clemson this season, he has 11.5 TFL, four sacks and a forced fumble."