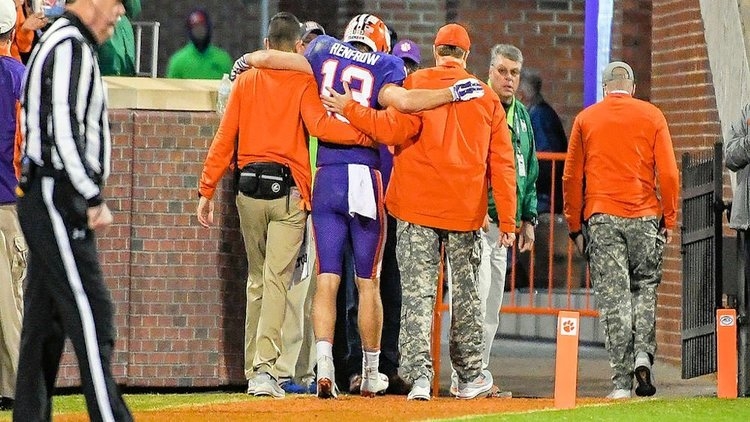 It wasn't the ideal Senior night for Hunter Renfrow as he was injured trying to make a spectacular catch in the second quarter against Duke.

Renfrow went to the locker room with help by the training staff after the play and didn't return to the 35-6 victory against the Blue Devils.

Swinney said during Saturday's postgame press conference that Renfrow was being evaluated and didn't specify the injury whether or not it was a head issue.

On Sunday during the media teleconference, Swinney shared the following comment about the beloved former walk-on:

"He was good today. He will be evaluated daily."

Swinney said that he didn't know for sure if Renfrow had a concussion and that Danny Poole will re-evaluate him tomorrow.

Swinney was asked why Renfrow is so beloved by Clemson fans.

"He’s been clutch for so long," he said. "He has made so many plays. I think everybody was shocked he didn’t make that play and then when he didn’t get up then I think everybody was like ‘oh, ok maybe there was a reason why’. He is just one of those guys - blue collar, just steady and never gets hurt. He’s just always dependable. I think to see him down was something that people aren’t used to seeing. Certainly thankful he is going to be ok. Definitely, I think it was something that made everybody pause for a second. I think everybody loves Hunter and his whole story and work ethic, his humility and just his selflessness. It’s easy to love a guy like that."

Renfrow broke two schools records during the contest with his 39th consecutive game with a catch AND his 43rd career start to break Terry Smith's school record for career starts by a wide receiver (42 from 1990-93).