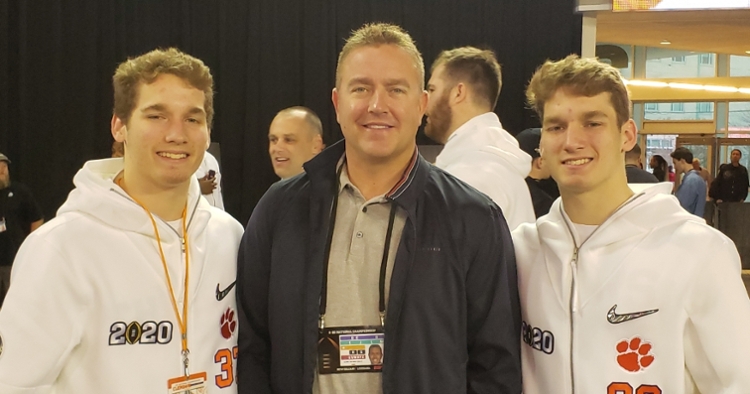 Herbie has two sons on the Clemson football team

Clemson quarterback Trevor Lawrence posted on social media in the 'WeWantToPlay' campaign recently got the attention of the college football world and even President Donald Trump.

ESPN college football commentator Kirk Herbstreit thought that Lawrence, Darien Rencher, and others helped the sport have a unified voice among the players.

"I think it's just great that over the last week or so to see the players in college football having an opportunity to have their voices be heard, whether it's been social media or being unified originally out of the Pac-12, the Big Ten got together, and now it sounds like you said Jay, late last night they all came together," he said.

Herbstreit understands that everyone is worried about the safety issues regarding the COVID-19 pandemic.

"I think there are different issues there that they all want to address, the main thing making sure that their safety is the primary focus, which I think from everyone I've talked to they're moving in a better direction than maybe where they were."

Herbstreit believes that most of the power in college football belongs to the five conference commissioners who are primarily looking out for their own conferences.

"I do feel that sometimes the administrators are put into a bad light where I think they're trying to figure this thing out," he said. "One thing that I have clearly seen is that it's easy to say there's a lack of leadership. The reality is in college football, without a commissioner and without the NCAA kind of be able to govern the rules or whatever decisions might be made, you basically have five leaders in college football, the Power Five conference commissioners. And they're all concerned about their constituents, their presidents, their fans, so it's hard to really get everyone on the same page because they're all dealing with their own agenda and their own set of issues and problems, and maybe what the Pac-12 is facing is different than what the Big Ten is facing and the SEC. So it's easy to sit on the outside and say 'why aren't these people making good decisions, it's because they're not worried about the collective body, they're worried just about their conference."

Safety issues regarding the players and students on campus is a complicated issue to manage for a school.

"The health of the players is obvious," he said. "Testing, and can we get better testing and more testing. How about trying to figure out where contract tracing, how do you draw the line with that when these players start to go to class, and a player becomes positive, how do you decide who's been within six feet of that player who is now positive for more than 15 minutes? Can you imagine policing that at Alabama vs. Ohio State vs. Texas A&M vs. Florida State? Is everyone going to go by the same rules? I think the idea to say that people don't want college football is insane, everybody wants college football, but how do you get there with the data that's coming in and logistically, how do you try to pull it off? Where people are going to test positive, it's just going to happen, and what do you do, how do you control that when they do test positive? I think that's the big hang-up here, the liability that is hanging over the head of all these decision-makers."