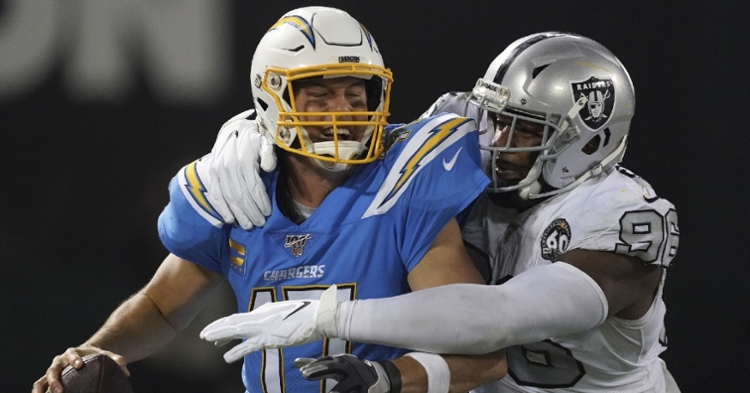 Raiders rookie defensive end Clelin Ferrell had a breakout game in the team's 26-24 victory over the Chargers on Thursday night.

The No. 4 overall pick showed his massive potential with eight tackles, 2.5 sacks, two other tackles for loss, three quarterback hits, and a pass deflection in 51 snaps.

Ferrell was the fourth rookie since sacks became official (1982) to have eight tackles and 2.5 sacks in a game. Also, the 2.5 sacks were the second-most by a rookie in the NFL this season behind only Nick Bosa's three sacks.

“We started getting pressure on him right from the start of the game, and that was it,” Ferrell said to the media postgame. “We knew they were going to be passing the ball, and they weren’t going to have much time, so we pinned our ears back and went after it.”

It was a massive turnaround statistically for Ferrell as he entered week 10 action with only one sack and 15 combined tackles.

Clelin Ferrell is up to 2.5 sacks in the game. May need another one if the offense can get the lead back. #RaiderNation pic.twitter.com/wqZtNKg2pM