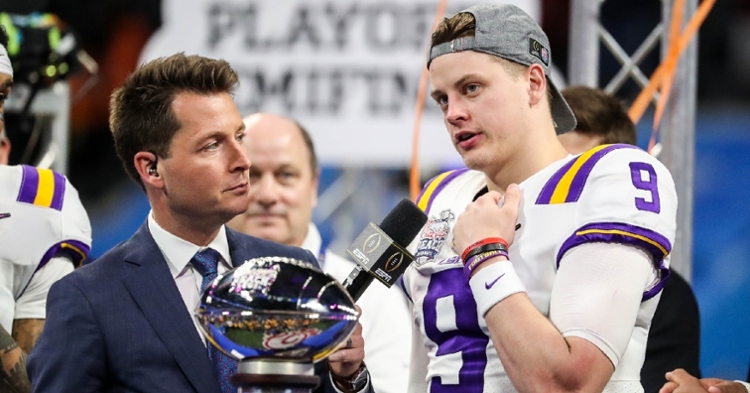 "You know Trevor Lawrence he's never lost the game, of course, won a national championship last year as a true freshman so naturally, I'm gonna take Joe Burrow," Palmer said. "He's been fantastic through 14 games this season. He's been lights out when you watched Joe Burrow. He checks all the boxes guys -- decision making, football IQ accuracy, but pocket presence makes him unique and special. He's the best I've ever seen at the college level when he's off schedule in the play breaks down. He has this uncanny ability to slide and move in the pocket, make somebody miss, keep the play alive, scramble the throw keep his focus downfield, and then accurate when his feet aren't set."

"78 percent completions this year. It's just insane. One thing to do it when it's on time and from the pocket. Another thing completely when you're off schedule and scrambling around, but picking between these two guys is like picking your favorite son or child, but I guess I'll go with Joe Burrow in this one."

Clemson will try to bring some pressure on the defensive side of things that might cause Burrow some indecision.

"Well, Clemson has to be able to get after Joe Burrow, and they have to affect him. They have to disrupt his timing, and it's not just enough to flush him out of the pocket, you have to get him on the ground. If it's not going to be sacks, you have to hit him, and he will be blitzed more than he's been blitzed at any time in his career.

"Brent Venables from Clemson is very aggressive. He will bring pressures from the linebacker spot the nickel, safety and corner and one thing Clemson does a great job of doing of, they anticipate where your blitz answers are going to be, and they get those accounted for so they know where the hots and the sight adjustments might come from so two things for Joe, you got to be tough because you're going to be hit. You've got to play with a sense of urgency and get the football out of your hand so the cat mouse game between the Heisman trophy winner and one of the best defensive minds in college football Brent Venables will be a lot of fun to watch."