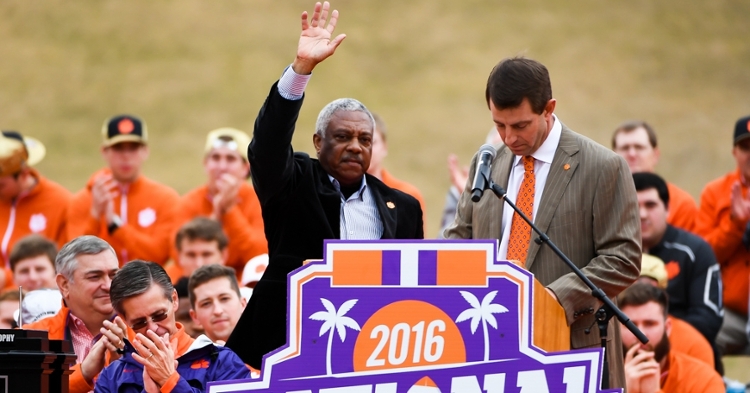 “It’s very humbling," McCorvey said. "For me, it’s very special for having grown up in that state. To be a part of a special recognition like being the in Alabama Sports Hall of Fame, it took a lot of people with me going back to my mom and my dad, the support of my family — my wife, Ann, my son, Marlon, my daughter-in-law, Brooke, my grandson, Beau — but on top of that, the players. That’s why I got into this business. This recognition is really for them because I’m standing on those guys.

"The other thing that’s important to me is the staffs that I’ve worked with all down through the years, all the way going back to the kids I coached in high school and every stop that I’ve made and everybody here at Clemson. Clemson has been a big part of what I’ve been able to do, and it’s really special to be part of a great group of other honorees I’m going into the Hall with.”

Among those McCorvey will join in the Alabama Sports Hall of Fame is Clemson Head Coach Dabo Swinney, who was inducted as part of the Class of 2018.

"And for he and Sylvester Croom to be going in together I think is just beautiful. Obviously, Sylvester was the head coach at Mississippi State and Woody was the offensive coordinator. I think Sylvester was the first African-American head coach in the SEC and Woody was the first African-American offensive coordinator at Alabama, and I just think about their journeys and the lives that they’ve impacted. I can just tell you, I’m not where I am today if it’s not for Woody McCorvey. I know this, there’s nobody more deserving than Coach McCorvey. I’m super proud, super happy, and I can’t wait to be a part of the celebration.”

A 42-year veteran of college football as a coach or administration, McCorvey returned to Clemson for the 2009 season, Head Coach Dabo Swinney’s first full year. He has worked with four national championship head coaches and three coaches who earned induction in the College Football Hall of Fame.

McCorvey serves as the primary liaison between Swinney and the athletic and IPTAY administrations. He also oversees the management of the football administrative offices. He supervises the football budget and works with the academic staff that has helped Clemson earn NCAA Academic Performance Public Recognition Awards in eight out of the last nine years.

McCorvey coached at the Division I level for 26 years and went to a bowl game in 17 of those seasons. He coached or signed 36 players who went on to a professional football career as well. From 1990-08, he coached in the SEC every year, including each of the last five at Mississippi State, where he served as assistant head coach and offensive coordinator in addition to coaching the quarterbacks.

Prior to joining the staff at Tennessee, McCorvey worked one season at South Carolina, where he served as the wide receivers coach in 1998 under former Tiger assistant coach Brad Scott. McCorvey took the South Carolina job following an eight-year stay at Alabama from 1990-97. He served seven seasons as its wide receivers coach and the 1996 campaign as offensive coordinator. He was the assistant head coach in 1997 as well.

Alabama had five top-25 final rankings in his tenure, including three seasons in the top five. The Crimson Tide won the 1992 national title with McCorvey serving as wide receivers coach and Swinney as one of his student-athletes. That season culminated with a 34-13 win over heavily-favored Miami (Fla.) in the Sugar Bowl. During the 1990-96 era, Alabama posted a 70-16-1 record and played in six bowl games. With McCorvey at the controls of the offense in 1996, Alabama finished 10-3, including a win over Michigan in the Outback Bowl.

From 1979-82, he served as an assistant coach at Alabama A&M and helped that program to the No. 6 rushing offense in Division II in 1981 after finishing 11th in the nation in scoring offense in 1980. McCorvey began his college coaching career at North Carolina Central in 1978.

McCorvey began his coaching career with a six-year stint (1972-77) at J.M. Tate Senior High School in Florida. A quarterback at Alabama State from 1968-71, McCorvey earned his bachelor’s degree from Alabama State in 1972 and a master’s degree from West Florida in 1977.

He was the recipient of the 2015 AFCA Outstanding Achievement Award for his contributions to college football. In 2010, the native of Atmore, Ala. was inducted into the Atmore Hall of Fame.