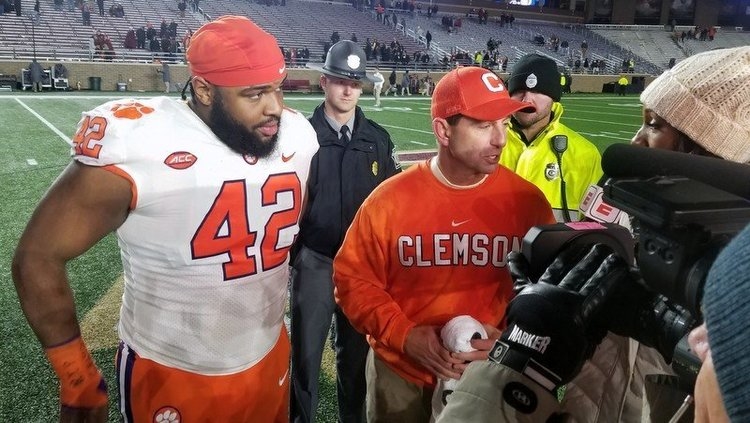 Christian Wilkins was a fan favorite at Clemson

"With everything going on with Coach Swinney and the media, I just feel like people are really trying to spin a negative picture of Coach Swinney in a lot of ways, and that is not who he is at all," Wilkins said. "That's not the guy that I have known since I was a sophomore or junior in high school. He is a man of faith. He loves his players. I know his character, and I know his heart."

Wilkins understands how impactful Swinney has been to many of his former teammates.

"I see a lot of different things being said about him that I don't necessarily agree with because I know him personally. I know his intentions, and I know his heart, and I know he's a great coach, and he's passionate about developing young men on and off the field."

Wilkins loves Swinney and will try to help him in any way that he can.

"Granted, he might not have said all the right things, he might have done some things that people disagree with and that maybe I disagree with. But that just shows where someone like me could really be a help to Coach Swinney too, just as someone who's close with him and as someone who loves him, continue to help educate him, just have those conversations with him about things going on with him and the media as well."

Dolphins DT Christian Wilkins comes to the defense of his former Clemson coach, Dabo Swinney, over some of recent criticisms of the coach. He also says Swinney may haven’t said all the right things but he can help him understand things better. (Via @MiamiDolphins) pic.twitter.com/EFAsEuvgza