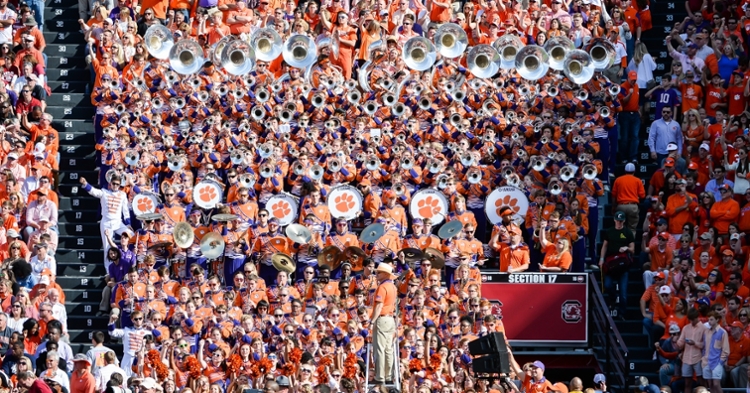 Tiger Band won't perform on the field this season

One of the best parts of a college football afternoon in the Death Valley is the sound of The Band That Shakes the Southland, the Clemson University Tiger Band. However, the band won't be in the middle of the field to greet the Tigers as they run down the hill before games this season after a decision handed down Friday by the ACC.

The ACC told game operations teams around the conference that bands won't be allowed on the field during the college football season. The University of North Carolina shut down their band for now, while Syracuse won't allow their band inside the Carrier Dome.

There isn't word if the Tiger Band will still perform inside the stadium, but Director Mark Spede said the band stands ready to guard the Clemson Spirit.

"We are still hopeful that Tiger Band can play an important role as the Guardians of the Clemson Spirit," Spede said. "Our primary mission is to support the team in any way we can, and we stand ready to provide the best Gameday atmosphere in the country this season. We desperately want to help the Clemson football team continue the amazing run they have been on, and we are looking at every option we can."

Tiger Band will continue to safely provide high-quality entertainment and support our Tigers this season. While we may not be performing on the field on gameday, you’ll still be able to catch performances all year. Details coming!! #COVIDCantStopUs #GuardiansOfTheClemsonSpirit

?? BIG NEWS: @theACC has sidelined bands this fall. No bands can perform on the field. pic.twitter.com/kWDBa6Pikb