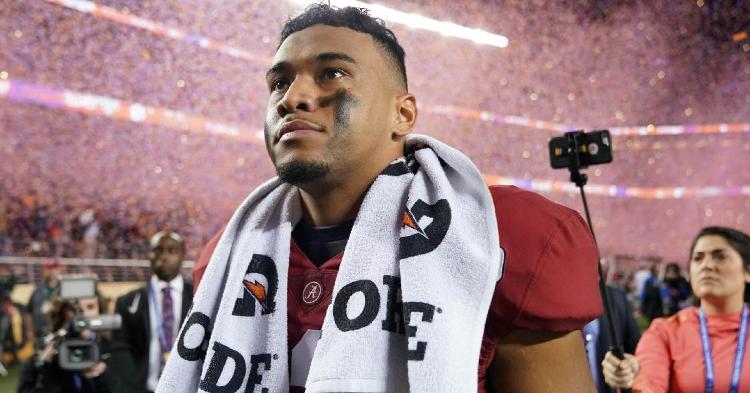 Alabama quarterback Tua Tagovailoa was carted off the field in the second quarter with the Crimson Tide winning 35-7 against Mississipi State on Saturday.

Tagovailoa was heard in serious pain according to sideline reporter Molly McGrath.

"He was screaming in pain as medical training staff had to pick him up and carry him off the cart."

During his half-time interview with ESPN, Alabama head coach Nick Saban said that Tagovailoa had a right hip injury.

"He hurt his hip. I don't know anything else more than that," he said. That was going to be his last series of the half. Certainly, I don't want to see anybody get hurt, especially not him."

Tagovailoa left the stadium in an ambulance to get medical attention.

“Tua Tagovailoa sustained a right hip dislocation that was immediately reduced at the stadium. He is undergoing further testing to determine the best course of treatment. He is expected to make a full recovery but will miss the remainder of the season.”

Saban will be second-guessed by the national media and fans for leaving in the hobbled star quarterback in the blowout.

Here's what happened to Tua, got injured, carted off.pic.twitter.com/wH2LpQ0crB

This is NOT a good look for Nick Saban at all. Tua beat down, couldn’t get off the field on his own power.

You’re up by 28 in the second quarter!!!!!! pic.twitter.com/O1dzdDmsKF

Tua getting carted off after getting tackled. pic.twitter.com/QveJEVYhxz

That looked really bad for Tua. Taken off field in cart with Bama up 35-7 in second quarter. Has two weeks to get ready for Auburn, but there’s a chance that’s the last time we ever see Tua playing college football.

As Tua is carted off the field remember he has no pension, retirement, etc.

So much for the last tweet. Looks like Tua hurt again. Maybe worse. And now cue the (justified!) questions abouy why he was in there up 35-7? Or at all? @AlabamaFTBL has one of the best medical staffs in sports. I just don’t get this though for the longer haul

Hopefully Tua is OK, but if this is a season-ending injury, @CFBPlayoff selection committee would downgrade Bama because of it when doing final rankings. This obviously would impact Bama's chances to finish in top four

Tua Tagovailoa is carted off while bleeding from his nose in the closing minutes of the first half pic.twitter.com/icUpbxmPna

"He was screaming in pain as medical training staff had to pick him up and carry him off the cart." @MollyAMcGrath said the first report is that Tua Tagovailoa suffered an injury to his right hip vs. Mississippi State. pic.twitter.com/ppMJykMq9N

8 million dollar coach Nick Saban sure is costing Tua alot of money, while he makes his.

My only real knock on Tua is health. But does anyone really think he will drop in the Draft? Maybe a spot. But Russel Wilson will be MVP. Kyler Murray has been very good. Those are the Tua comps. And the NFL is a copycat league.

Tua’s injury could have happened on his first drive just as easily as his last. That’s not a hot take, that’s just the risk inherent in the game. Here’s hoping he’s healthy again soon.

Tua Tagovailoa was airlifted to St. Vincent’s Medical Center in Birmingham. Nick Saban called it a hip injury that was possibly “serious” in on-field interview at halftime. Source says there was concern before end of game it was a “very serious” injury. MRI and scans next.

Breaking News: Tua Tagovailoa is out for the season with a dislocated hip with a posterior wall fracture, a person with knowledge of the situation tells me.