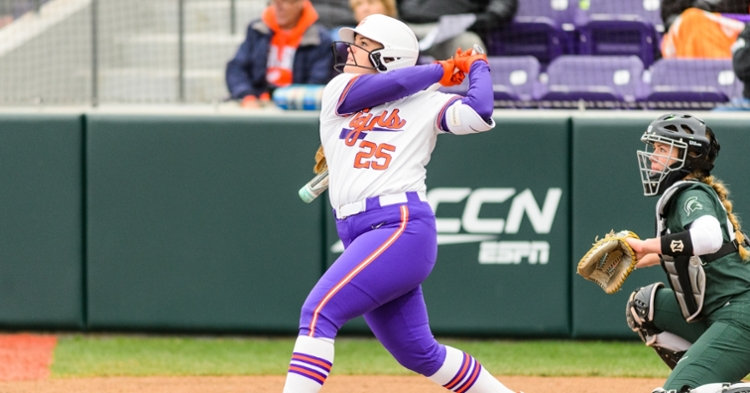 Marissa Guimbarda added an insurance run in the seventh on a double.

KISSIMMEE, Fla. – The Clemson Softball team (10-7) won its third game of the Diamond 9 Citrus Classic I tournament, which was held at ESPN Wide of World Sports Complex, by a score of 6-3 over Morgan State (2-7) on Sunday. The Tigers scored a combined five runs in last two innings to put the game out of reach. Freshman right-handed pitcher Valerie Cagle threw her fifth complete game and earned her fifth win of the season of after surrendering just one earned run on the day. Freshman outfielder Alia Logoleo went 3-for-4 at the plate, earned her second triple of the season in her first at-bat and scored two runs.

The game was scoreless through the first four innings before Clemson junior infielder Cammy Pereira recorded her first of two RBIs on a single through the left side, which scored Logoleo to give the Tigers a 1-0 lead. The Bears evened the score in the bottom of the inning on a Clemson fielding error.

After two Tiger singles by MK Bonamy and Hannah Goodwin, Logoleo recorded her third hit of the game on a bunt single. Later in the play, Bonamy scored on a throwing error by the Morgan State pitcher, and Carlee Shannon, who was pinch running for Goodwin reached third. Then, Clemson freshman catcher JoJo Hyatt drove a high fly ball to right field for a sacrifice fly as Shannon tagged up to score. Two batters later, Pereira claimed her second RBI of the day on a single up the middle to knock home Logoleo and give the Tigers a 4-1 lead entering the bottom of the sixth.

The Bears did not go away easily though, scoring a pair of runs – one unearned – on a first-pitch swinging double to right center by first baseman Amy Pacheco. Clemson extended its lead to 6-3 in the top of the seventh as Marissa Guimbarda recorded her sixth RBI of the tournament on a double to center field as Cagle rounded third to score with ease. Then, Bonamy singled to right field with a 1-2 count to score Guimbarda and the final run of the game.

Up next, the Tigers host No. 19 Georgia (13-3) at Clemson Softball Stadium on Wednesday, Feb. 26. Assuming the Bulldogs are still ranked in the top 25 when the next USA Today/NFCA Coaches Poll is released on Monday, Feb. 24, it will mark the first time Clemson will face a ranked opponent in its inaugural season. First pitch is slated for 5 p.m. and is set to stream on ACCNX.

Tickets for general admission on the berm at Clemson Softball Stadium are on sale for $2.

Clemson vs Morgan St Box Score
ONE DAY ONLY! Fanatics.com Black Friday Sale 20% off on orders over $75
Comment on this story