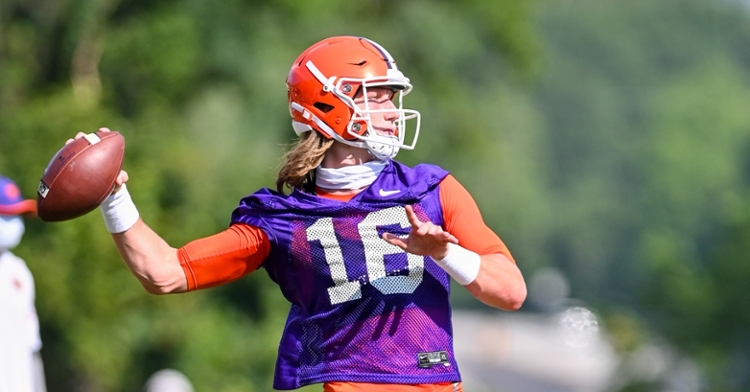 The start of Clemson fall camp typically means football players using social media to sign off until the end of the season. The year 2020 hasn't been typical in any fashion really and Clemson's Tigers used Twitter Saturday to campaign for having a season at all.

The most prominent voice in college football might just be projected No. 1 pick Trevor Lawrence and he made his stance clear.

"I don’t know about y’all, but we want to play," Lawrence said, who also retweeted an opinion on how Power 5 players may not be any safer in the COVID-19 pandemic being sent home.

If we were to cancel CFB, can you honestly tell me that (Power 5) players would be sent home to safer, healthier environments? None of these decisions are easy but I don't see this as a binary decision w/ regards to the best interest of player health when we're talking P5.

Lawrence wasn't alone in a social media campaign to keep the season on:

If you told me I could only get COVID playing football, then that’s a no brainer to not play

But fact is that we can get COVID being anywhere doing anything, and if we cancel the season it’s still going to be here after https://t.co/blwEago3Vn

We want to play.

Their voices chime in as a number of writers in national media cast a gloomy picture for the future of the 2020 season after the Mid-American Conference's season postponement Saturday to spring.

Report: "Ultimately, why did the MAC cancel the season?"

Reporter: "Why aren't Power 5 leagues listening to the same advice?"

MAC administrator: "I'm not touching that one."

But this thing has been coming undone slowly and the prospect for putting on a season worth having seems pretty grim. I can think of a lot of reasons a season is worth saving, but is the season we might get worth saving?
Don't know.

I'll be here to tell the story, either way.

Clemson is still slated to return to practice on Monday in preparation for the 2020 season and a start on Sept. 12 at Wake Forest.

Let’s work together to create a situation where we can play the game that all of us love. Not divide and argue. There is a way forward

I don’t know about y’all, but we want to play.