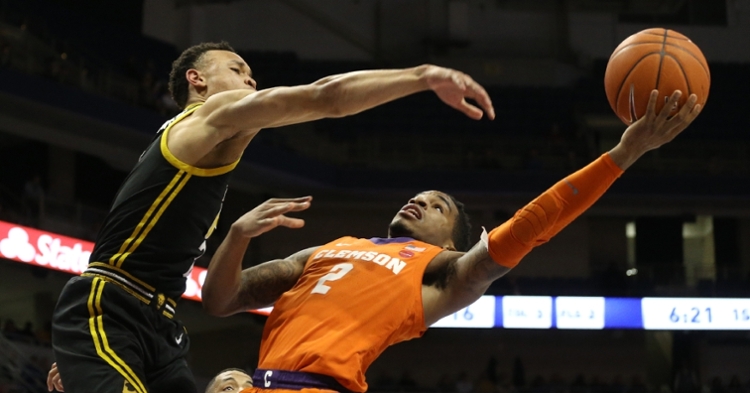 Clemson snapped a three-game losing streak with a strong effort on both ends of the court in a 72-52 win at Pittsburgh Wednesday.

The Tigers (12-12, 6-8 ACC) extended their lead to 19 points midway through the second half thanks to a 10-of-17 start from beyond the perimeter, notching the big edge after back-to-back 3-pointers from freshman Al-Amir Dawes.

Clemson went into a lengthy scoring drought shortly after, however, allowing Pitt (15-10, 6-8) back into the game with a 12-0 run over nearly five minutes.

Another Dawes trey helped steady the Tigers in the closing minutes and push their lead back into double-digits, where it would stay. Dawes scored 17 of his 18 points in the second half.

Pitt was held to 31 percent shooting, while Brownell’s group shot 50 percent from the field and 59 percent from beyond the arc.

Clemson held its largest halftime lead in an ACC contest this season (32-24) after its zone looks helped provoke some scoring droughts for the Panthers.

The Tigers’ first basket didn’t come until nearly four minutes into the game, but after missing their first five shots, they knocked down seven of their next eight attempts and seized a lead they wouldn’t relinquish.

Alex Hemenway picked up from where he left off in a career-best 16 points versus Notre Dame to knock down all three of his first-half shots for eight points.

The win was a second conference road conquest this season, joining the history-making victory at UNC.

Clemson returns home to host the No. 5 Louisville Cardinals on Saturday (4 p.m./ACC Network), which were upset by Georgia Tech on Wednesday.

"We did some good things tonight. This was a great performance. I thought our bench players were the guys who got us going early on. All of a sudden, we made some shots and got some excitement from the bench. Those guys were excited to play. I thought we competed exceptionally hard. We mixed in some zone in the first half and played primarily zone in the second half. That worked out well. I'm really happy for our players. I'm happy that, from start to finish, they played about as well as they could've played."

"Al-Amir [Dawes] was terrific tonight. Obviously, when he's making shots like that, it changes our team. It was great to have Aamir [Simms] back. He settles us down and makes so many heady plays. Alex [Hemenway] continued his hot shooting. I just loved the way he played tonight. Trey [Jemison] came in and rebounded well, getting four offensive rebounds."

On the keys to the win:

"This was a great win. This was what we needed. I think the bench was part of that. Curran [Scott] was aggressive. He made a shot and got fouled early on. It was important that we got off to a good start. I felt good about our chances if we got off to a good start, and we did an unbelievable job. Pitt made a big run, but Al-Amir made a big shot that put that run out, and it never came back. This was a good team win."

Clemson-Pitt box
Get the All-New Clemson Nike Shoe before it sells out!
Comment on this story