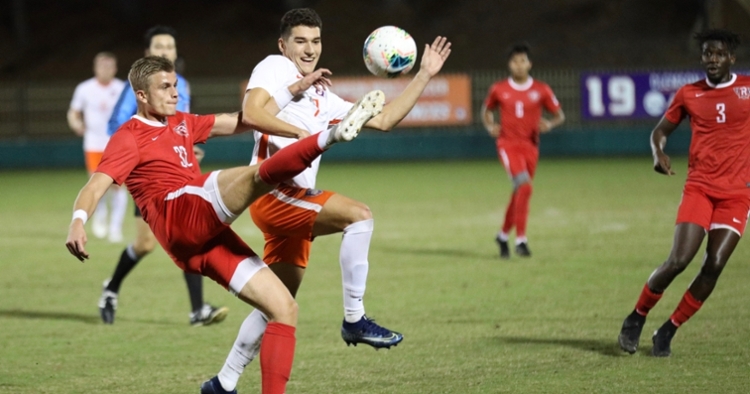 Clemson, S.C. – Five goals from four different players propelled the third-ranked Clemson men’s soccer team to a 5-0 victory over the Radford Highlanders Tuesday night. The result moved the team to 12-1-1 on the year. The Tigers dismantled the visiting team in all phases of the match, with 23 players seeing playing time. In the match Tuesday night, Clemson recorded 24 shots, making it their fifth game this season in which the team has eclipsed the 20-shot mark.

Head Coach Mike Noonan spoke on the performance by saying, "The guys have prepared themselves really well and are playing in a manner that is well-rounded. The defense is creating offensive chances and that showed itself particularly in the first 15 minutes of the game."

Robbie Robinson contributed a brilliant performance in the Tigers’ effort, as the junior assisted on three goals and scored one of his own. Robinson has contributed 12 points to his squad's efforts in their last two matches.

This is the Tigers’ third-straight game in which they have scored four or more goals, bringing their season total to seven matches with four or more. The win over the Highlanders gave Clemson its eighth non-conference win of the season, resulting in an unblemished record against non-ACC opponents.

Clemson found itself on the board early in the match, as a Radford own goal in the second minute gave the Tigers a 1-0 lead. Five minutes later, Adrian Nunez netted his third of the season to extend his side's margin. The final goal of the half was scored by Tanner Dieterich, as the senior put away a loose ball in the box after a shot by Robinson was deflected away from goal. Dieterich’s score was his second on the year.

The effort displayed by the Tigers in the second 45 minutes was to the same caliber shown in the opening half. The team passed the ball around the pitch and consistently challenged the Highlanders’ defense, forcing the goalie to make four saves in the second half alone. In the 77th minute, Robbie Robinson converted a free-kick from 26 yards out, rocketing his attempt above the wall and slotting it in under the crossbar. Just a minute later, Robinson directed a ball toward a waiting James Brighton who volleyed it home for the Tigers’ fifth of the match.

Earlier in the day, Clemson was slotted into the third position in this week’s United Soccer Coaches poll, making it the eighth straight week in which the team has ranked amongst the top 20. The ranking is the Tigers’ highest of the season, after being ranked fourth in the Sept. 24 poll.

Clemson will be back in action on Oct. 25 as they take on Boston College at Historic Riggs Field to close out their slate of home regular season matches. The contest against the Eagles will give the Tigers an opportunity to honor its seven graduating players.