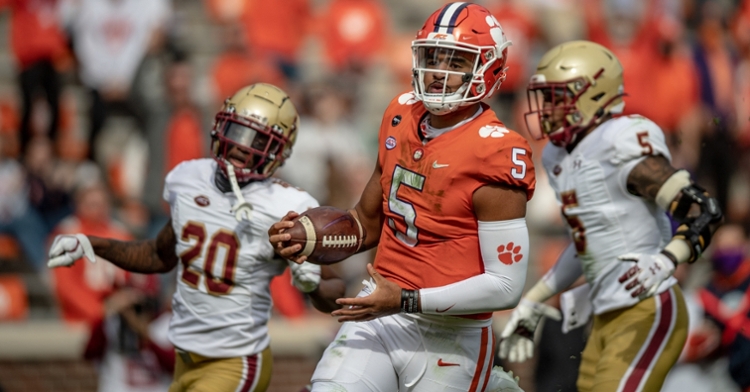 CLEMSON, S.C. — The Atlantic Coast Conference announced today that offensive tackle Jackson Carman (Co-Offensive Lineman of the Week), running back Travis Etienne (Running Back of the Week) and quarterback D.J. Uiagalelei (Rookie of the Week) have earned ACC Player of the Week honors for their performances in Clemson’s 34-28 victory against Boston College on Saturday.

Clemson has now earned a total of 536 weekly honors since 1968. The trio of selections this week gives Clemson 11 Player of the Week honors this season.

Carman graded out at 92 percent with three knockdowns, according to Clemson’s coaching staff, to earn his first career ACC weekly honor and Clemson’s 12th Offensive Lineman of the Week pick since 2018. The junior left tackle helped protect Uiagalelei in the quarterback’s first career start, helping the true freshman throw for 342 yards and account for three total touchdowns in the comeback victory.

Etienne earned his ninth career ACC weekly honor after recording 20 carries for 84 yards with one rushing touchdown and seven receptions for a career-high and school-running-back-record 140 yards with a receiving touchdown. In the contest, he broke the ACC career rushing record held by NC State’s Ted Brown (4,602 from 1975-78). His 264 all-purpose yards in the game were a career high and tied for the 10th-most in school history, and with the 140 receiving yards in the game, he became only the 12th player in FBS history to record at least 4,000 rushing yards and at least 1,000 receiving yards in a career.

Uiagalelei earned his first career ACC weekly honor after making his first career start and completing 30-of-41 passes for 342 yards with two passing touchdowns and no interceptions while leading Clemson to the largest comeback in Memorial Stadium history (18 points). With the performance, he joined Deshaun Watson and Trevor Lawrence as the only true freshmen in Clemson history to win their starting debuts, and his 342 passing yards were the third-most by a Clemson freshman (true or redshirt) in his starting debut. He becomes the first Clemson player to win ACC Rookie of the Week since his teammate, Trevor Lawrence, also earned the honor as a true freshman against Boston College.

Report: Deshaun Watson has officially requested a trade from Texans
Post your comments!