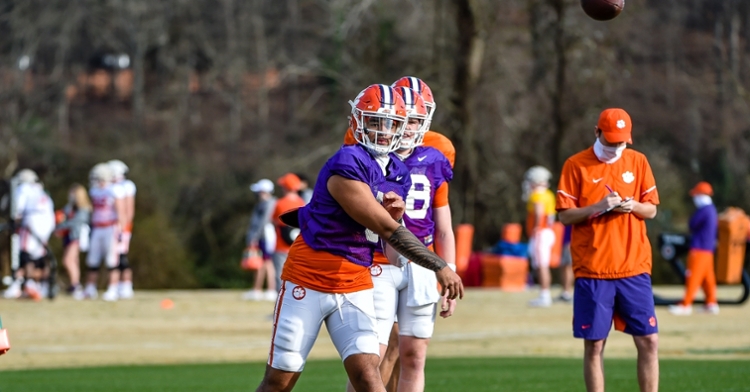 Clemson's Tigers and coach Dabo Swinney have had quite the collection of quarterbacks over the last decade or so.

Ahead of DJ Uiagalelei assuming the starting job this season, Swinney has the southern California native on a tier with one first-round NFL draft pick already -- Deshaun Watson -- and a No. 1 pick to come in Trevor Lawrence.

"It's just unbelievable, his arm talent," Swinney said Monday afternoon on The Roar's Road Rage with Walt Deptula afternoon show. "It's like you've taken Deshaun Watson and Trevor Lawrence and you've got to some lab somewhere and somehow you've birthed DJ Uiagalelei. He's 6-5 250 and he's the one guy who makes Trevor look normal throwing the football. He's got that kind of arm. He's got a little bit of (Patrick) Mahomes in him as far as uniqueness as far as his ability to make really abnormal throws -- out-of-rhythm type throws, not always with a steady platform, a perfect pocket (and) things like that. He can throw the ball over the top of anybody and he makes it look easy."

Beyond the physical traits, Uiagalelei shares so much more with those elite QBs.

"He's going to be special to watch," said Swinney. "The mentality is what makes those guys special and that's what those guys have in common. It's that mindset. It's that mentality. It's the things that you don't see. It's the football IQ. Their ability to process, their competitiveness, their will to prepare -- that separates them from everybody else. We're pretty fortunate to have another guy in here -- to have a guy who has a chance to be really, really special for a long time at that position."

Behind Uiagalelei, redshirt sophomore Taisun Phommachanh and redshirt freshman Hunter Helms are there this spring, and more help is coming in the summer with freshman enrollees in Bubba Chandler, Will Taylor and Billy Wiles (another preferred walk-on).

"That is one of the main areas is that we have to really develop that position from a depth standpoint," Swinney said. "Taisun was making great progress and was off to a really great start and I really like where he is from a mentality standpoint. But he's been out the last few days and we'll get him back after the break. That's a critical position...That will be a huge -- we're nowhere near what we need to be right now. And Hunter Helms is another young promising prospect. That's a position that we need to close the gap and we need to have more guys ready to go. Not just ready to play but ready to go win.

"But I do think Taisun is a guy who will be ready to help us this fall and hopefully have a bigger role than he had this past year as a redshirt freshman."

Tigers rally to top BC for Rittman's 800th career win
Post your comments!