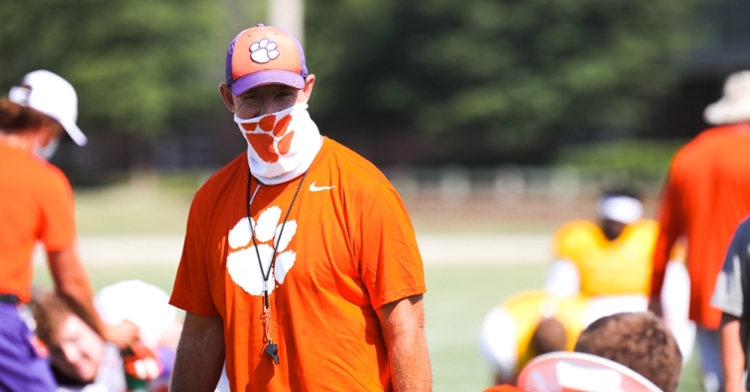 The 2020 college football season is shaping up to be one unlike any other.

Four of the 10 FBS conferences have postponed their fall sports seasons -- including two Power 5 conferences in the Big Ten and Pac-12.

Playoff executive director Bill Hancock has said to multiple outlets this week that's it's too early to make a call on what should happen with the College Football Playoff. Clemson coach Dabo Swinney says whoever emerges for a football final four will have earned it.

"Hopefully, we are all able to move forward and when it's all said and done, whoever wins it, wins it," Swinney told reporters Wednesday, "and they are the champion. It's the same way in every sport. Basketball got disrupted and they are going to crown a champion. Golf got disrupted and if somebody wins it they will crown a winner. Somebody will win in baseball, MLS soccer, they are playing, and someone will win a championship.

"Maybe it's a shortened season, maybe it's not as many teams or whatever, but you better believe whoever wins it is going to have to earn it. Ain't nobody gonna give nothing to you. All you can do is control what you can control and we just hope we have the opportunity to play."

Swinney's team has made a Playoff appearance the last five seasons and 18 of the 24 Playoff participants so far are still scheduled to compete this year.

"It is what it is. You pick the four best teams and go play," Swinney said. "We have been one of those four -- five years in a row. In my opinion, that doesn't change anything for us. We are just trying to be the best Clemson we can be and whoever you play every week you try to win that game and try to keep moving forward. We don't have any control over that stuff. And I certainly don't judge them in any way.

"They made that decision and that is for them. I am just grateful that our presidents in the ACC and the Big 12 and the SEC continue to believe in our protocols and what we are doing and supporting us and these players and what they are trying to do in having a season."